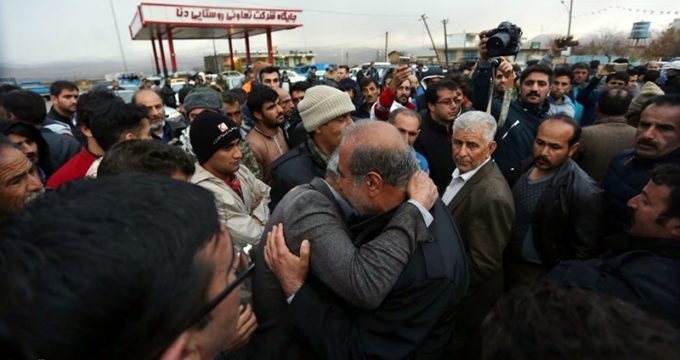 AFP- Iranian officials said rescue teams would work through the night, battling blizzard conditions to find a passenger plane that disappeared in the Zagros mountains on Sunday with 66 people aboard.

Iran’s Red Crescent said the search for Aseman Airlines flight EP3704, which disappeared from radar 45 minutes after taking off from Tehran, was being severely hampered by the weather.

“The mountainous terrain is impassable. Thick fog and snow and rain have made it impossible to use helicopters, but yes the operation is ongoing and will continue,” said Morteza Salimi, head of its rescue and relief section.

He said there were 45 teams working around the Dena mountain of Iran’s southwestern Zagros range.

The airline said 60 passengers were onboard, including one child, as well as six crew.

The blizzard was expected to end on Sunday night but heavy fog would continue until morning, a local governor told IRIB.

It was the third disaster to strike Iran in recent months, after an earthquake that killed at least 620 people in Kermanshah in November and 30 Iranian sailors were lost in an oil tanker collision off China’s coast last month.

Supreme leader Ayatollah Ali Khamenei sent a message of condolence, saying the news had “left our hearts overwhelmed with sadness and sorrow”, according to state television.

Families of the passengers gathered at a mosque near Mehrabad airport.

“I can’t bring myself to believe it,” said a woman whose husband was on board.

A man who missed the doomed flight told reporters of his conflicting emotions.

“God has been really kind to me but I am so sad from the bottom of my heart for all those dear ones who lost their lives,” the unnamed man told the Tabnak news website, which showed a picture of his unused ticket.

Decades of diplomatic isolation have left Iran’s airlines with ageing fleets of passenger planes which they have struggled to maintain and modernise.

Aseman’s fleet includes at least three ATR-72s that date back to the early 1990s, according to the IRNA news agency.

A spokesman for ATR, which is part-owned by Europe’s Airbus, told AFP “the circumstances of the accident remain unknown” and that international investigators were ready to assist Iran “if needed”.

President Hassan Rouhani ordered the transport ministry to set up a crisis group to investigate the crash and coordinate rescue efforts, ISNA reported.

Aseman’s three Boeing 727-200s are almost as old as the country’s 1979 Islamic revolution, having made their first flights the following year.

Iran has suffered multiple aviation disasters, most recently in 2014 when 39 people were killed when a Sepahan Airlines plane crashed just after take-off from Tehran, narrowly avoiding many more deaths when it plummeted near a busy market.

Lifting sanctions on aviation purchases was a key clause in the nuclear deal Iran signed with world powers in 2015.

However, the sale could be scuppered if US President Donald Trump chooses to reimpose sanctions in the coming months, as he has threatened to do.

“I take this opportunity to send condolences to the families of the 66 civilians that lost their lives,” Netanyahu said at the Munich Security Conference.

“We have no quarrel with the people of Iran, only with the regime that torments them,” he added.

The US Treasury Department, which must approve aviation sales to Iran, has done so for 80 Boeing jets and 100 Airbus planes for national carrier Iran Air.

The first few Airbus jets have already arrived in Tehran.