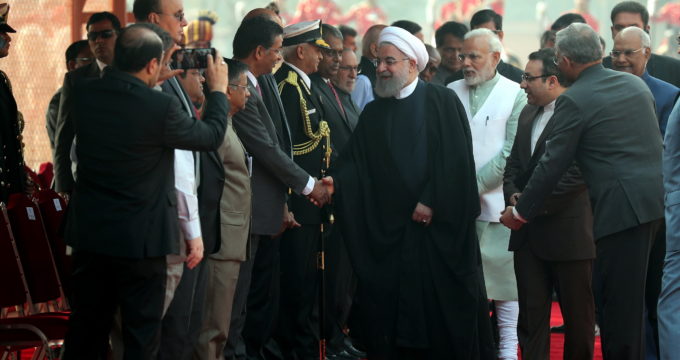 While in New Deli, President Rouhani paid tribute to the leader of the Indian independence movement Mahatma Gandhi by laying a wreath of flower at his tomb and signing a memorial book, held talks with Indian Foreign Minister Sushma Swaraj, Prime Minister Narendra Modi and also attended a press conference attended by Modi and attended a meeting with the India’s Parsi community.

Speaking to reporters upon his arrival at Indira Gandhi International Airport, Rouhani underlined that “good meetings were held in Hyderabad with Muslim people, as well as with prominent scholars and Iranians living in India.”

In the meeting with Swaraj, Rouhani said the development of bilateral relations between the two major countries of the region will be beneficial for both nations and the whole region.

Swaraj, for her part, emphasized that India was determined to cement relations with the Islamic Republic of Iran in all fields.

Meanwhile, the Islamic Republic of Iran and the Republic of India signed 15 documents and MoUs to deepen relations.

These documents and memoranda of understanding were signed in the presence of the Rouhani and Modi.

In a meeting with Modi, Rouhani said on Saturday that historical relations between the Islamic Republic of Iran and India are beyond diplomatic cooperation.

Indian prime minister, for his part, described the visit as a golden opportunity for expansion of relations and cooperation between the two countries, and said the cornerstone of such relations is based on mutual trust.

In a joint press conference with Indian PM, Iranian president emphasized that no disagreement lies between the two countries, adding, “Iran and India are determined and focused on developing ties.”

Moreover, Indian PM vowed to use all capacities to strengthen already friendly relations between two nations.

Rouhani returned home from India on the wee hours of Feb 18, 2018 after a 3-day official visit to the country.