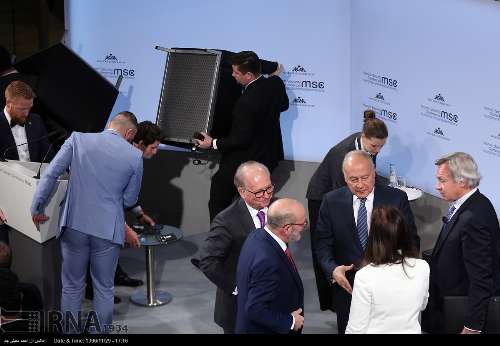 IRNA – Since its establishment in 1963, the Munich Security Conference has not seen such an organized warmongering approach that dominated the annual event this year.

This was aimed at bringing NATO on board and turning the alliance into Trump’s military equipment against Iran and Russia.

The Munich Security Conference chairman Wolfgang Ischinger told German media, “Since the collapse of the former Soviet Union, we have not seen such a huge threat of military confrontation between superpowers.”

This is while a poll, which was published by a German institute in 2018, shows that over 70 percent of Germans consider the US under Trump along with the Daesh terror group as the biggest threat to global peace and security.

The propaganda waged by the ‘Trumpists’ in the Munich Security Conference to label Iran as a supporter of terrorism looks ridiculous. This is because the Islamic Republic has been at the forefront of the fight against terrorists in Iraq and Syria.

Nonetheless, the bulk of such a smear campaign in the world’s biggest security conference, which was attended by hundreds of experts and scores of world leaders and high-ranking officials, needs to be contemplated.

Meanwhile, European leaders who have adopted a rational policy to prevent further tensions and have also been pursuing peaceful approaches to settle conflicts across the globe, insisted that NATO should not be used as the military equipment of the US president.

Furthermore, NATO Secretary General Jens Stoltenberg demanded that Europe adopt a different approach from that of the US in dealing with global conflicts.

On the whole, it seems that Europe will face difficult days in the future. This is because it will have to react more strongly to the warmongering policies of the ‘Trumpists’ and their allies.

It remains to be seen whether Europe will ultimately be able to prevent NATO from being turned into Trump’s military playing field.