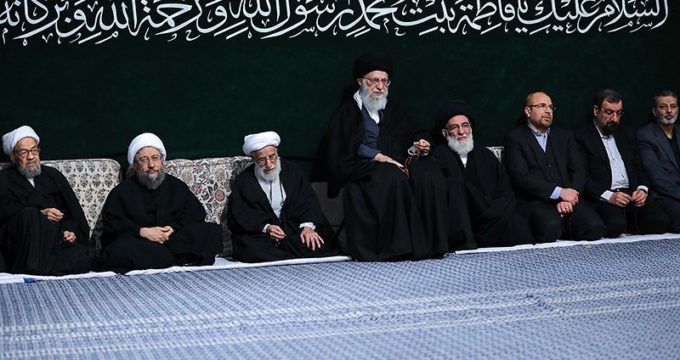 MNA – The second night of the mourning ceremony of Hazrat Fatemeh Zahra (SA) was attended by Leader of the Islamic Revolution Ayatollah Khamenei.

Ayatollah Khamenei took part in Fatemiyeh ten days mourning ceremony and the martyrdom of Hazrat Zahra at Imam Khomeini’s Husseiniyeh, where a number of officials and thousands of different walks of life were attending.

Hazrat Fatemeh Zahra (SA) was the only child of the Islamic prophet Muhammad and Khadijah and was a wife of Imam Ali (AS) and mother of Imam Hassan and Imam Hossein . She is the object of love and respect of Muslims, as she was the child closest to her father and supported him in his difficulties, was the supporter and loving caretaker of her own husband and children.

Fatemeh is a vital character in the religion of Islam and is considered a role model for all Muslim women.