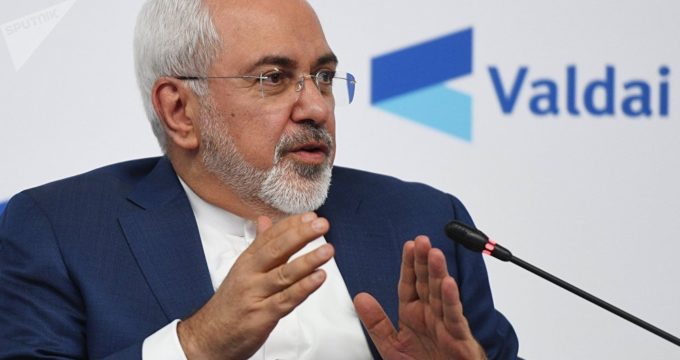 Iran has no military bases in Syria – FM Zarif

“No, we do not have them [in Syria],” Zarif told reporters when asked the relevant question.

According to the top official, Israel violated Syria’s airspace and such “aggression” should be stopped.

“What happened in Syria on Saturday [February 10]? Israel violated Syria’s airspace several times. It should be noted that Israel is permanently bombing Syria. And Syrian forces had managed to down an Israeli aircraft for the first time,” Zarif said.

The statement comes amid Israeli and US officials’ concern over alleged Iranian presence in Syria, a claim that Tehran has repeatedly refuted, however, admitting that it sends military advisors to help the Syrian government fight terrorists.

Following the retaliatory fire, the Israeli side attacked 12 positions in Syria, including eight Syrian airplanes and three anti-aircraft batteries. Following the incident, Iranian Foreign Ministry has once again denied its military presence in Syria, lambasting claims about the downed drone.

Speaking further, Zarif said that Iran and Saudi Arabia could work together to stabilize and reconstruct the region.

“There is nothing that prevents Iran and Saudi Arabia from working together for the improvement of the situation not only in Iraq, but also in Syria, Yemen, Lebanon, Bahrain and elsewhere. We can actually work together as a source of stability and development,” Zarif said at the conference “Russia in the Middle East: playing on all fields” in Moscow.

On the Situation in Afrin

According to Zarif, the issue of Syria’s Afrin could only be solved by the legitimate Syrian government.

“The problem in Afrin can best be resolved through lawful and legitimate sources that we have, through the Syrian government,” Zarif said at the conference “Russia in the Middle East: playing on all fields” in Moscow

Senior Kurdish official Badran Jia Kurd announced the day before that the Syrian Kurdish forces and government had reached an agreement for the Syrian army to enter Afrin to help halt Turkish attacks. He added that the army troops would be deployed along a number of border positions and were expected to arrive in the Afrin region within the next two days.

Turkish “Olive branch” operation in Syria’s Afrin has been carried out since late January. According to the data, provided by Ankara, Turkey has eliminated over 1.5 thousand militants, including both Kurdish fighters and Daesh militants.

On US Presence in Syria

Syria is currently facing a “new wave” of intervention by the United States, as Washington continues to pursue its geoeconomic interests, Zarif said Monday.

“Unfortunately we see a new wave of foreign intervention and occupation particularly by the US driven by an obsession. If we look at the attack by the US against the Syrian forces on February 7, we see some profiting, a short-sighted geoeconomic interest to capture territory,” Zarif said at the conference.

The use of proxies by the United States is dangerous for the region, the politician added.

On February 7, the US-led coalition said in a statement that it had conducted defensive airstrikes against the pro-government forces in Syria that attacked the headquarters of the US-backed Syrian Democratic Forces (SDF) east of the Euphrates River. On February 8, media reported citing a US official that at least 100 Syrian pro-government troops had been killed in the coalition’s air and artillery strikes.

The US-led coalition of more than 70 members is conducting military operations against Daesh in Syria without any approval of Damascus.Within the coalition, Washington provides support to the People’s Protection Units (YPG), which are regarded by Ankara as affiliates of the Kurdistan Workers’ Party (PKK), designated as a terrorist organization in Turkey and several other countries.

The United States has also planned to create 30,000-strong border forces on the Turkey-Syria frontier.

Furthermore, the US side continues the de facto occupation of a 34-mile zone around its military base in Syria’s At-Tanf helping Daesh militants to hide from the Syrian government troops, the Russian Foreign Ministry said last week.