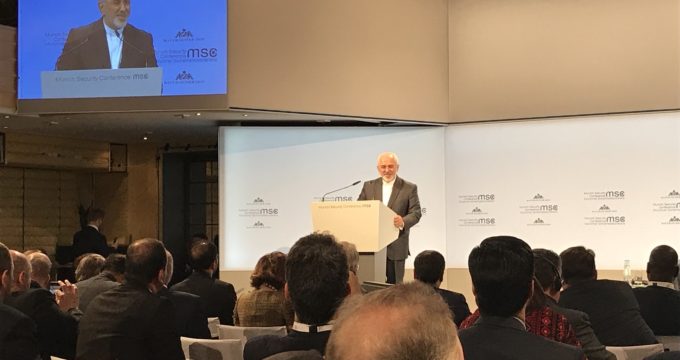 Haaretz– Iranian Foreign Minister Mohammed Javad Zarif on Sunday called remarks by Prime Minister Benjamin Netanyahu, in which he waved wreckage of an Iranian drone shot down over Israel, a “cartoonish circus.”

Zarif said some at the conference “resort to cartoons to justify strategic blunders or maybe avoid domestic crisis,” possibly hinting at Netanyahu’s legal trouble at home.

Netanyahu, who spoke earlier at the conference, said held up a piece of an Iranian drone Israel shot down last week, and asked Zarif, who was sitting in the crowd: “Do you recognize it? You should, it’s yours. Don’t test us.”

When asked about Netanyahu’s speech, and what should happen for Iran to recognize Israel, Zarif accused the prime minister of using “aggression as a policy.”

“The entire speech was trying to evade issue. What has happened is the so-called invincibility has crumbled. Israel uses aggression as a policy against its neighbors.”

Zarif referred to an incident earlier this month in which an Israeli F-16 fighter jet was downed while striking targets in Syria.

“It’s the problem of aggression,” Zarif said. “Domestic corruption is another problem, I’m not talking about that.”

When asked about what would Iran do if the United States happened to abandon the nuclear deal, Zarif said Iran will respond “seriously” if its interests are not secure, adding that the world will be “sorry for taking this erroneous course of action.”

Zarif however said that the deal was struck the accord “in spite” of Netanyauh, adding that the world “will maintain” the agreement, “despite his [Netanyahu’s] delusional attempts” to dismantle it.”