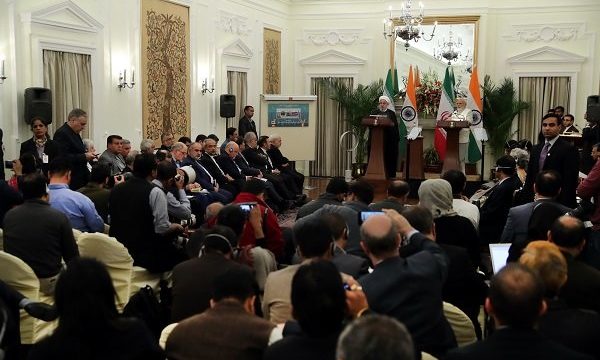 MNA – After signing several memorandums in New Delhi, Iranian president and Indian PM vowed to use all capacities to strengthen already friendly relations between two nations.

Following the ceremony of signing 15 memorandums of understanding in India’s capital New Delhi on Saturday, the President of the Islamic Republic of Iran and the Prime Minister of India held a press conference during which they emphasized the will of the two countries to consolidate and further develop ties between Tehran and New Delhi, and described taking advantage of all capacities for cooperation beneficial for the two nations and peoples of the region.

Hassan Rouhani said “Indian Prime Minister’s visit to Tehran in 2016 was an important step for the development of tripartite ties between Tehran and New Delhi. After the visit, a momentum began in the relations between the two countries, the fruits of which we are seeing today.”

The president added “relations between Iran and India are more than political and economic relations, and are historical, cultural and based on civilization, the evidence of which can be well seen in the many historical sites that exist in India.”

Rouhani added “the two great Iranian and Indian nations have historically found their best friends and today we need to strengthen that close friendship”.

The president said “the Islamic Republic of Iran welcomes development of cultural, commercial, economic, academic and scientific cooperation, as well as in the field of new technologies”.

Iran and India have very important and strategic relations in two important fields of transit and energy, Rouhani pointed out, adding: “We have had very good discussions and relations on Chabahar Port, the rail industry and related industries, which we hope that we will soon see further development of cooperation between the two countries in these areas.”

“Today, we are witnessing the development of Chabahar Port and a momentum in the construction of Chabahar railway to Zahedan with India’s investment,” continued Rouhani adding “we are also fully prepared for further development of energy cooperation, including in oil, gas and petrochemicals”.

Rouhani said “we also had a great deal of discussion today on facilitating economic relations, ​​preferential trade tariffs, better banking relations, visa relations and facilitating travel between the two countries for business purposes and people which can have good results the two nations.”

The president referred to talks between the two countries on regional issues and said “in today’s talks on the most important bilateral, regional and international affairs issues, we did not disagree on even a single topic.”

He also said “we have a common viewpoint on the commitment to international agreements and the strength of the Joint Comprehensive Plan of Action (JCPOA), and we have common views on the establishment and development of multilateral relations in the region, and we both believe that Afghanistan should be a safe and secure country.”

“We believe that the various issues of the region, especially in Syria, Iraq and Yemen, should be resolved through political means,” continued the President.

India’s Prime Minister Narendra Modi described Rouhani’s visit to India as a golden opportunity to strengthen relations between Tehran and New Delhi and said “the two countries have enjoyed mutual trust in their relations for thousands of years of cultural and historical ties and we are determined to develop our relations more closely with each other.”

He noted “India is seeking to develop its all-embracing relations with the Islamic Republic of Iran, especially in the field of economic development and development of railroads, and today, with Iran’s admirable efforts in developing railway lines, India can be linked to Afghanistan and Central Asia through Chabahar and we are determined to help develop Chabahar.”

The Indian Prime Minister also said “we believe that Rouhani’s visit to India is a great step for relations between the two countries and the people of the region, as well as the development of strategic cooperation between Iran and India.”