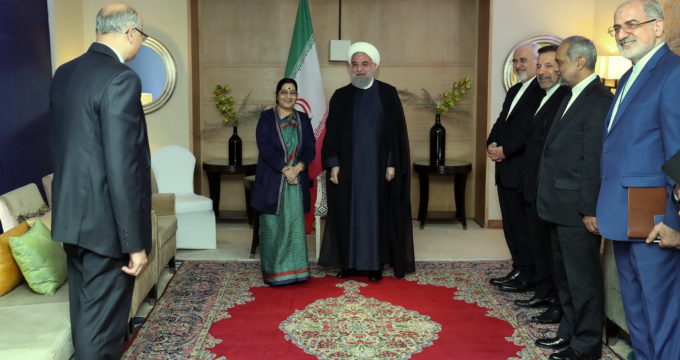 President Rouhani arrived in the Indian capital on Friday night after a two-day stay in Hyderabad, south of India and was officially welcomed by Indian Prime Minister Narendra Modi.

During the welcoming ceremony, the national anthems of the two countries were played and a 21-gun salute was given to President Rouhani. The Iranian and Indian presidents also reviewed a guard of honor.

At the end of the ceremony, President Rouhani paid tribute to the late leader of the Indian independence movement Mahatma Gandhi, who saved India from the yoke of colonization, by laying a wreath of flower at his tomb and signing a memorial book.

The Iranian President’s visit to India is taking place at the official invitation of the country’s Prime Minister Modi who visited Iran last year.

A large delegation from Iranian private sector businessmen and tradesmen are also in India as part of the President Rouhani’s entourage.

President Rouhani ends his 3-day vistit to India this evening.