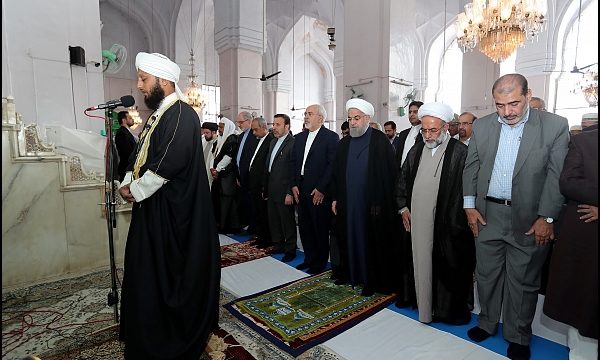 Iranian president in Hyderabad on first leg of India’s visit

February 17, The Iran Project – As part of three-day visit to India, Iranian President Rouhani and his high-ranking politico-economic delegation first arrived in Muslim-majority city of Hyderabad in Telangana state on Thursday (Feb. 15) at the official invitation of Prime Minister Modi.

A large delegation from Iranian private sector is also in India as part of President Rouhani’s entourage.

While in Hyderabad, President Rouhani visited Qutb Shahi Tombs, which contain the tombs and mosques built by the various kings of the Qutb Shahi dynasty, addressed a gathering attended by Indian elites, religious scholars and leaders of the Islamic community, attended Friday Prayers and met with Iranians living in India.

In a meeting with elites, religious scholars and leaders of the Islamic community of Hyderabad, Iranian president stated that the distance among Muslims is West’s conspiracy, noting that there is no military solution to Islamic societies’ problems.

He also expressed satisfaction over being present among the Muslim people of Hyderabad and the beautiful country of India on the anniversary of the victory of the Islamic Revolution, adding “my presence in Hyderabad means that Iran and India have a historical and cultural bonds, beyond economic and political relations between the two countries.”

Attending Friday Prayers at Hyderabad’s Makkah Masjid, Iranian president  called on all Muslims across the world to preserve their unity in the face of the Israeli regime and other enemies.

Rouhani also censured the US for recognizing Jerusalem al-Quds as the “capital” of Israel, calling on the Muslims to support the Palestinian cause.

He also lashed out at Washington for imposing a ban on travelers from six largely Muslim countries.

In a meeting with Iranians living in India, Iranian president said that Iran has shown the world it has a great negotiating power in addition to a big defensive power, reiterating that Farsi has shown itself better in the Indian subcontinent better than any other parts of the world, adding that Farsi can accelerate the relations between Iran and India.