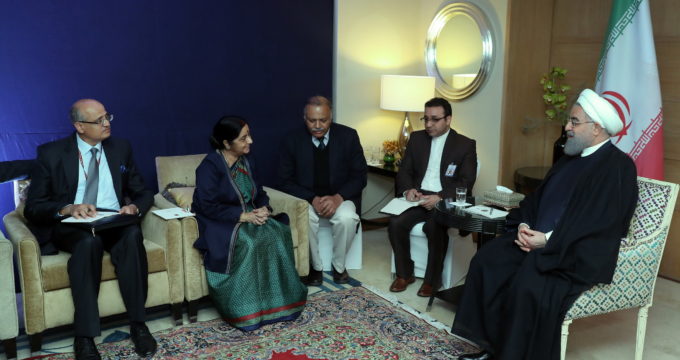 Iran considers no limitation in deepening inclusive ties with India

president.ir- The President described Tehran-New Delhi relations growing and developing and stressed that the Islamic Republic of Iran considers no limitation in deepening inclusive ties with India and welcomes any initiative aimed at cementing these ties.

In the meeting with the Minister of External Affairs of the Republic of India, Sushma Swaraj, that took place on Saturday, Dr Hassan Rouhani also said: “In my meetings with the President and the Prime Minister of India I pointed out that if we can reach the goal of the great relations that our ancestors in Iran and India used to have, we have done a great job”.

The president said that the development of bilateral relations between the two major countries of the region will be beneficial for both nations and the whole region, saying: “With regard to many cultural and historical attractions in both countries, facilitating travel between Iran and India for the people of both countries is important”.

Dr Rouhani also mentioned that the high-ranking officials of the two countries are determined to promote cooperation, adding: “Iran and India can develop cooperation in the fields of energy, transportation, mining, industry and modern technologies, and Tehran welcomes Indian companies’ more active presence in the Iranian market by providing them with their required loans”.

The foreign minister of India also emphasised that her country was determined to cement relations with the Islamic Republic of Iran in all fields.

Sushma Swaraj described the visit of senior Iranian and Indian officials to the capitals of the two countries as the sign of high level of relations, and said: “We hope that the two countries’ relations will develop in all fields of mutual interest”.

She also expressed hope that visa facilitation would contribute to easier travel between the two countries.

The Minister of External Affairs of India also noted the project of development of Chabahar port very important not only for Iran, but also for the region, saying: “The people of Afghanistan, India and the region are very pleased with the development project of Chabahar”.