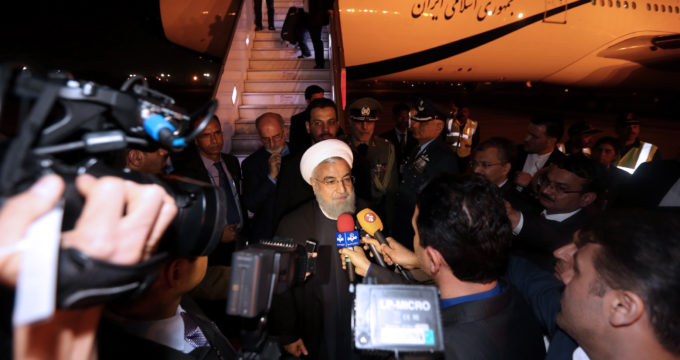 Deepening Iran-India ties in the interest of not only the two nations, but also regional stability, security

president.ir- President of the Islamic Republic of Iran spoke to reporters at New Delhi Airport and said that deepening of relations between Iran and India, as the two major countries of Asia, can be beneficial not only to the interest of the two nations but also for the stability and security of the region.

Dr Hassan Rouhani said on Friday night: “Good meetings were held in Hyderabad with Muslim people, as well as with prominent scholars and Iranians living in India. This official visit has in fact two parts, cultural and political-economic, with its cultural part in Hyderabad”.

The president added: “There are many civilization monuments in Hyderabad showing how the cultures of Iran and India are linked”.

“Important meetings will be held in New Delhi with the President and Prime Minister of India in various fields of agriculture, modern technology, banking and transportation, which will be an important step in the development of bilateral relations,” continued Dr Rouhani.

“We will also have talks with Indian officials on international and regional issues,” the president added.