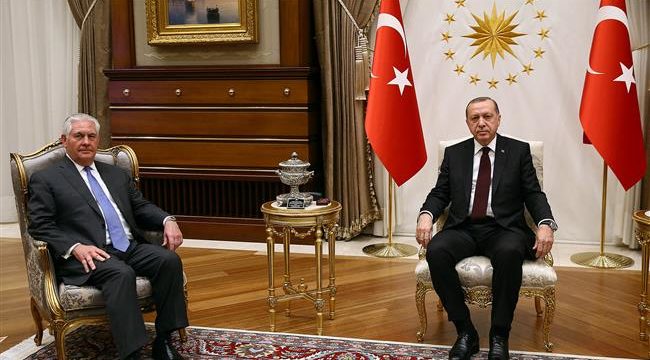 Press TV- US Secretary of State Rex Tillerson and Turkish President Recep Tayyip Erdogan have had a meeting as relations between the two North Atlantic Treaty Organization (NATO) partners have frayed in the wake of Ankara’s ongoing cross-border offensive in Syria’s northwestern region of Afrin against the Kurdish People’s Protection Units (YPG).

A Turkish presidential source, speaking on condition of anonymity, said the top US diplomat and the Turkish leader sought ways to improve strained ties during their Thursday meeting in Ankara, which lasted for more than three hours behind closed doors.

The source noted that Erdogan conveyed his priorities and expectations on Syria, and also discussed Iraq, regional developments and the fight against terror with the US secretary of state.

Moreover, a US State Department spokesman travelling with Tillerson said the top US diplomat and Turkey had a “productive and open” talk.

“The two engaged in a productive and open conversation about a mutually beneficial way forward in the US-Turkey relationship,” he said.

Ahead of the meeting, Turkish Defense Minister Nurettin Canikli told reporters at a news briefing in the Belgian capital city of Brussels that Ankara expects Washington to expel the YPG from the US-backed alliance of Arab and Kurdish militants, known as the so-called Syrian Democratic Forces (SDF).

“We demanded this relationship be ended. I mean we want them to end all the support given to the Syrian arm of PKK, the YPG. We demanded this structure be removed from SDF,” Canikli said.

The Turkish defense minister also said that his American counterpart Jim Mattis had told him the United States was working on a plan to retrieve weapons given to the YPG, especially heavy weapons.

Tillerson, however, later said that Washington had “never given heavy arms” to the YPG, and there was therefore “nothing to take back.”

The remarks came as the Pentagon had earlier confirmed the existence of heavy weapons in the YPG’s hands, which had been provided by the US.

“It is our intent to regain large vehicles and heavy or crew-served weapons once specific threats have been defeated,” Pentagon spokesman Colonel Rob Manning said last November.

Ankara views the YPG as the Syrian branch of the militant Kurdistan Workers’ Party (PKK) that has been fighting for an autonomous region inside Turkey since 1984.

Erdogan has repeatedly said that Afrin should be cleared of “terrorists,” and demanded the deployment of Turkish troops there during a speech back in November 2016.

This is while US officials regard the YPG as the most effective fighting force against the Daesh Takfiri terrorist group in northern Syria, and have substantially increased their weaponry and technology support to the terrorist group.

The controversy over a possible Syria border force first started on January 14 when a report emerged on Reuters saying that the military coalition led by the United States in Syria was planning to set up a large border force of up to 30,000 personnel with the aid of its militia allies.

The Syrian government has already condemned the “brutal Turkish aggression” against Afrin, rejecting Ankara’s claim about having informed Damascus of the operation.

“Syria completely denies claims by the Turkish regime that it was informed of this military operation,” the source added.