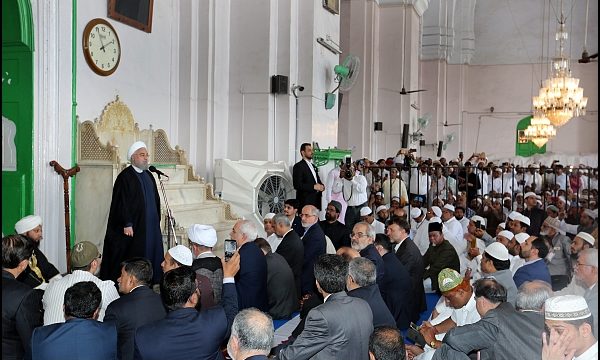 Iran president slams US recognition of Jerusalem as capital

AP — Iran’s president on Friday strongly criticized the Trump administration’s recognition of Jerusalem as Israel’s capital and urged Muslims to support the Palestinian cause.

Hassan Rouhani also lashed out at the United States for imposing a ban on travelers from six largely Muslim countries. He was addressing a congregation after Friday prayers at Mecca Masjid in the southern Indian city of Hyderabad during a three-day visit to India.

Rouhani called for unity between the Sunni and Shia sects of Islam. He said the Shias, Sunnis and people of other ethnicities coexisted peacefully in Iraq and Syria for centuries until the West created discord there.

Rouhani is to meet on Saturday with Indian Prime Minister Narendra Modi in New Delhi.

He said India and Iran were the cradles of Asian civilization, and that this century and the next would belong to Asia.

Rouhani also referred to the fatal shooting of 17 people at a Florida high school and said this showed that material progress alone cannot guarantee peace in the United States. He urged Muslims to follow Islam’s moral code of conduct.

Rouhani’s visit to India comes at a time when U.S. President Donald Trump has threatened to scuttle an international deal reached with Iran in 2015 over its nuclear program that ended economic sanctions imposed on the country.

The uncertainty puts India in a difficult position with its growing ties with the United States.

India is helping Iran develop Chabahar Port on the Gulf of Oman for trade with Afghanistan and Central Asia, bypassing Pakistan, which has refused to provide New Delhi access through a land route.

In 2016, India, Afghanistan, and Iran decided to establish a trade route for land-locked Afghanistan and Central Asian countries. India committed up to $500 million for the development of Chabahar along with associated roads and rail lines.

India shipped its first consignment of wheat to Afghanistan by sea through Chabahar last October.