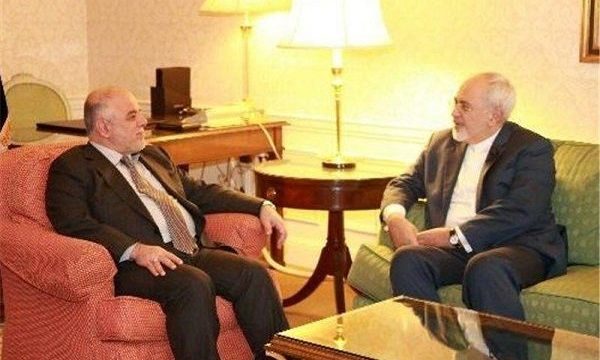 Iranian Foreign Minister Mohammad Javad Zartif met with Iraqi Prime Minister Haider al-Abadi on Wednesday on the sidelines of the Kuwait International Conference for the Reconstruction of Iraq (KICRI).

Iranian top diplomat left Tehran on Tuesday to attend the KICRI conference in Kuwait City of Kuwait where representatives from many countries and international bodies have taken part to mull over ways to help Iraq reconstruct.

The Iraqi premier in this meeting hailed the role of Iran in the war against the ISIL and clearing the Iraqi territories from terrorists. He then touched upon the participation of Iranian companies in reconstruction of Iraq and attached great importance to it saying it is highly appreciable.

Mr. Zarif, in this meeting, for his part, reassured the Iraqi PM that as the Islamic Republic of Iran stood beside the Iraqi nation and government in the war against terrorists, it will not spare any efforts to contribute to reconstruction of Iraq. Mr. Zarif asserted that Iran sees Iraq as an important political and economic partner.

“Considering the eagerness of Iranian economic firms, traders, and people to participate in Iraq, we hope to see a great boost in the volume of bilateral cooperation in areas of trade and economy,” said Mr. Zarif.