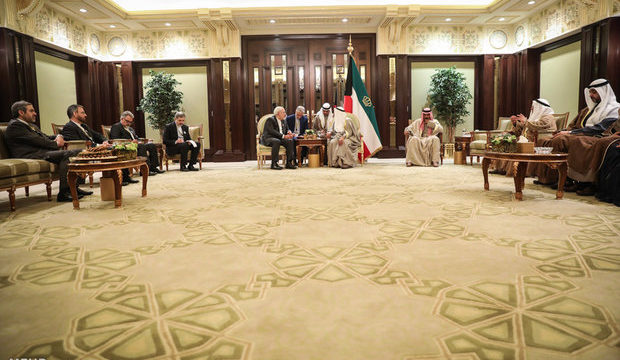 Addressing the KICRI conference, Zarif invited all the countries participant at the conference to grab the opportunity of reconstruction of Iraq to get closer, noting that all the international community is indebted to Iraq for what Iraq endured in fighting the spread of terrorism.

” Iraq can serve as a bridge connecting those engaged in its rebuilding. Resisting the tendencies to turn Iraq into a venue for rivalry is imperative. We also recommend cooperation over competition in reconstruction efforts. The Iranian public and private sector are thus ready to work in partnership with their counterparts in Iraq,” Zarif stated.

He also voiced hope that the regional problems and disagreements get solved with dialogue and initiatives of the governments of the region.

Zarif, for his part, voiced gratitude for Kuwaiti Emir’s efforts to mediate in the current crises of the region and expressed hope the efforts fruit the desired result.

In a meeting with Zarif, the Iraqi premier also hailed the role of Iran in the war against the ISIL and clearing the Iraqi territories from terrorists. He then touched upon the participation of Iranian companies in reconstruction of Iraq and attached great importance to it saying it is highly appreciable.

Then Zarif reassured the Iraqi PM that as the Islamic Republic of Iran stood beside the Iraqi nation and government in the war against terrorists, it will not spare any efforts to contribute to reconstruction of Iraq.

“Considering the eagerness of Iranian economic firms, traders, and people to participate in Iraq, we hope to see a great boost in the volume of bilateral cooperation in areas of trade and economy,” said Zarif.

Zarif heading a delegation left Tehran for Kuwait on Feb.13 to attend Iraq reconstruction conference which aims at gathering financial aids to reconstruct war-torn areas, paving the way for presenting radical solution to internal conflicts, renovation of Iraqi national and local capacities, reinforcing society and balancing the reconstruction process and the national reconciliation program as well as attracting foreign investment.