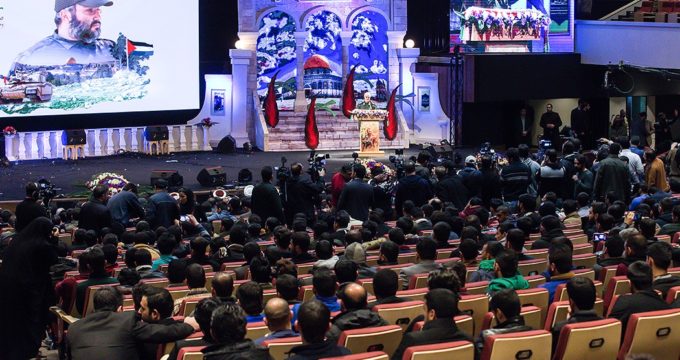 IRNA – The senior Lebanese military figure, Imad Mughniyeh, is still largely unknown to the young people who are fighting on the path of righteousness, a top Iranian IRGC commander said on Thursday.

Speaking in at the conference held in the Iranian capital to mark the 10th anniversary of the martyrdom of Imad Mughniyeh, a top Lebanese Hezbollah, Iran’s Islamic Revolution Guard Corps (IRGC) Quds Force Commander Major General Qasem Soleimani admired IMad Mughniyeh and Abbas Mousavi, martyrs of the Resistance Front, for their characters.

Praising Mughniyeh, General Soleimani said that ‘the value of his character has remained unknown to the young fighters of the Muslim world, whether Shia or Sunni, and to those Christian who are fighting for the righteousness.

The conference was attended by some prominent figures of the Muslim world, including Nabil Qaouk, a member and deputy member of the executive council of Hezbollah.

Also during the event the annual prize of the conference awarded to the family of the Lebanese fighter.

Mughniyeh was killed on 12 February 2008 by a car bomb that detonated as he passed by on foot in the Kafr Sousa neighborhood of Damascus, Syria.