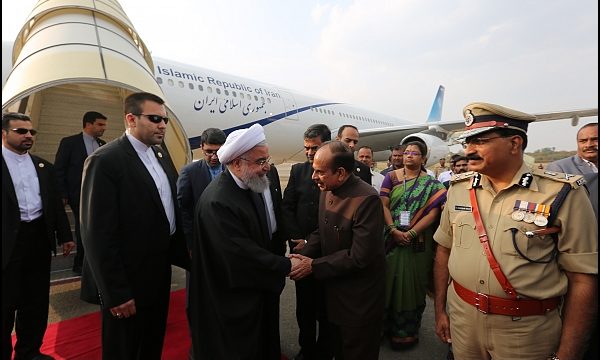 Iran has dismissed Germany’s “baseless” claim about its role in the recent escalation between Syria and Israel, saying the Tel Aviv regime, whose survival depends on chaos and confrontation, is to blame for the rising tensions in the region.

Iran’s president, on Thursday and before leaving Tehran for New Delhi, said that during his stay in India he and his accompanying team will discuss with the Indian officials ways to enhance bilateral relations in an array of fields.

A senior adviser to Leader of the Islamic Revolution Ayatollah Seyyed Ali Khamenei says Iran’s development of missiles does not concern any countries as it is totally a matter of domestic policy.

Tehran’s ballistic missile program must be placed under international surveillance, French President Emmanuel Macron has said. The bid positions the French leader to get tougher on Tehran while preserving the nuclear deal that US President Donald Trump has threatened to scrap, Reuters said.

US instrumental in Daesh, terrorism spread in Middle East: Iran

The United States has played a key role in the expansion of Daesh and other terrorist groups across the Middle East, says an Iranian diplomat at the United Nations, condemning Washington’s new accusation that Iran destabilizes the region.

Deputy Commander of the Iranian Army for Coordination Rear Admiral Habibollah Sayyari underlined Tehran’s opposition to talks with any country on its missile and defense power.

The senior Lebanese military figure, Imad Mughniyeh, is still largely unknown to the young people who are fighting on the path of righteousness, a top Iranian IRGC commander said on Thursday.

Iran’s semi-official ISNA news agency is reporting that the country’s president has ordered an investigation into recent suicides at some detention centers.