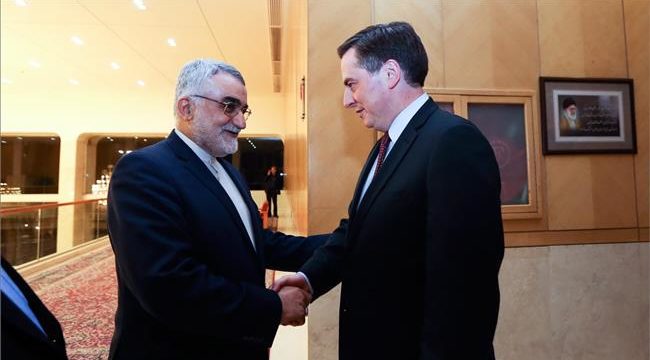 Press TV- The European Parliament (EP) “welcomes and supports” the removal of sanctions against Iran under the 2015 nuclear accord with world countries, says a senior member of the EU’s legislative body visiting Tehran.

Chairman of the EP’s Foreign Affairs Committee David McAllister, who is in Tehran at the head of a European parliamentary delegation, made the comments in a meeting on Wednesday with Alaeddin Boroujerdi, head of the Iranian Parliament’s Committee on National Security and Foreign Policy.

McAllister conveyed both the EP and the European Union’s all-out support for the implementation of the nuclear agreement, known officially as the Joint Comprehensive Plan of Action (JCPOA).

Europe, he said, considers the JCPOA to be a useful document which promotes international peace and stability, and supports its full implementation by all signatories.

While trying to enhance common understanding, he said, the MEPs have traveled to Tehran for consultations with Iranian officials about issues of common interest as well as regional and international challenges, he said.

Boroujerdi, in turn, hailed Europe’s support for the nuclear agreement, expressing hope that its continued implementation ushers in further development in mutual relations, especially in commercial and economic areas.

The senior Iranian lawmaker pointed to US President Donald Trump’s stonewalling attempts targeting the deal, and said if Washington violated the accord’s provisions, Tehran would, in turn, act “based on its own interests.”

“The US and other parties to the document should understand that the JCPOA is not changeable and negotiable under any circumstances,” Boroujerdi asserted.

The European delegation’s visit was a response to one by Boroujerdi to Brussels on January 24, when he met with McAllister and other officials.

A senior European Parliament member says the EU strongly supports the 2015 Iran deal, and calls for closer ties with Tehran within the framework of the landmark accord.

The agreement, reached between Iran and the P5+1 countries — the US, the UK, France, China, Russia and Germany — put limitations on parts of Iran’s nuclear program in exchange for removing all nuclear-related sanctions.

Over the past year, Trump has been trying to weaken the agreement in numerous ways, including by advising Europe not to resume its post-JCPOA economic transactions with Iran as well as threatening to “tear up” the deal and reintroduce nuclear-related bans against the Islamic Republic.

In January, he extended waivers of economic sanctions on Iran for another 120 days but said he was doing so “for the last time.”

Washington has also been seeking to lobby the European signatories to develop a “side agreement” to the Iran deal.