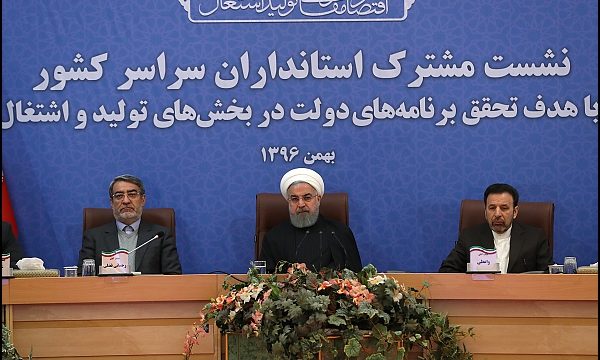 Addressing a meeting in Tehran attended by governor generals of provinces on Tuesday (Feb. 13), President Rouhani said that “Independency’ means nobody should meddle in Iran’s affairs or fate, adding that if Iranians were asked whether they preferred to decide about their fate or be dependent on foreigners, the answer by over 98.2% would be ‘independency.”

Meanwhile, Larijani said Iranian nation will not allow anybody to interfere in its internal affairs, adding that, “If there were any problem or disagreement, the big and capacious nation of Iran would solve it with the will of the nation because the Americans are too faceless to pretend friendly to our nation.”

In a meantime, Commander of Iranian Army’s Air Force stated that Iran’s defensive capability is not violating regional security, rather it helps to the establishment of security in the strategically important Persian Gulf region.

Commander Shahsafi noted that the historical movement of the Iranian Air Force in toppling the regime of Shah means in brief that enjoying welfare is not worth missing freedom and getting dragged into the foreigners’ exploitation.

Touching upon the US and certain European countries on holding negotiations over Iran’s missile program and defense capabilities, Mousavi said it was the nation’s demand for building the country’s defense walls higher against the intrusion of any ‘thieves’.

“The Iranian nation is well-informed and well-aware that when a thief asks the house owner to lower the walls, he isn’t asking that out of the kindness of his heart; he just wants to find an easier way into the house,” said the army commander.

Hassan Rouhani, Iran missile program, JCPOA February 13, 2018
Military judge orders all media out of Ahed al-Tamimi’s courtroom
Iran President to be in Hyderabad on February 15 and 16