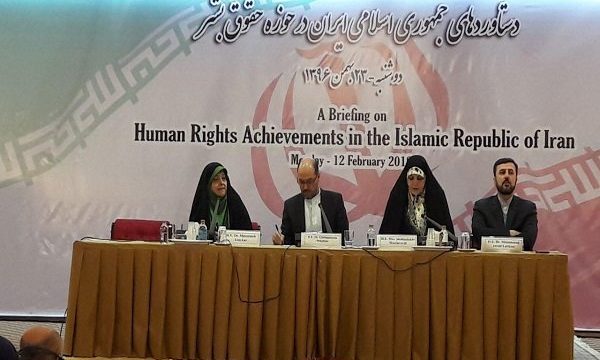 Tasnim – Iran’s Foreign Ministry held a meeting in Tehran to brief the foreign ambassadors on the country’s human rights achievements as part of plans to promote cooperation with the other states in promoting human rights.

The Monday gathering in the Foreign Ministry’s Centre for Political and International Studies was held to introduce the latest developments and progresses made in the field of human rights in Iran.

Chaired by Deputy Foreign Minister for Legal and International Affairs Gholam Hossein Dehqani, the meeting was held in two separate parts. In the first part, Vice-President Ebtekar took the podium to elaborate on the latest achievements of Iran in various fields relating to women and family affairs with a focus on empowering Iranian women.

Later, Molaverdi talked about different aspects of the Iranian Charter on Citizens’ Rights, including its development and implementation. She also discussed a mechanism for supervising the implementation of the charter.

In the second part of the briefing, Justice Minister Avaei pointed to Iran’s achievements in protecting the rights of children, saying Islam and the Iranian society attach huge importance to children.

Thereafter, the representative of Assyrian and Chaldean Christians in the Iranian parliament, Yonathan Betkolia, elaborated on Iran’s achievements in defending the rights of religious minorities.

For his part, head of the parliamentary commission for legal and judicial affairs, Allahyar Malekshahi, talked about the commission’s efforts as well as the major policies to fight against narcotics trafficking. He also touched on the reform of the policy and efforts in the war on drugs.

At the conclusion of the meeting, Dehqani said, “All the existing evidence indicates that the move by certain states to draft human right resolutions against Iran, and the appointment of special rapporteurs on the situation of human rights in the Islamic Republic are politically motivated and would not promote human rights situation in the country.”

He went on to say that such resolutions would only aggravate mistrust of the international human rights bodies and would cast doubt on the legitimacy of the UN in this field.

During the both parts of the meeting, a number of foreign ambassadors and delegates expressed their views on the topic.

Tehran has frequently reiterated that it basically disapproves of appointment of a UN special rapporteurs on the situation of human rights in Iran, saying what is more ridiculous is that Saudi Arabia assigns such rapporteurs.