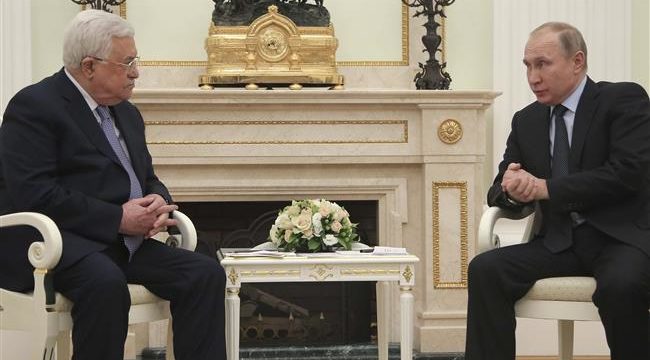 Abbas meets Putin in Moscow to discuss US mediation role

Press TV – Palestinian President Mahmoud Abbas has told Russian President Vladimir Putin that his country will no longer accept Washington as mediator in the conflict with Israel.

“We state that from now on we refuse to cooperate in any form with the US in its status of a mediator, as we stand against its actions,” said Abbas in a meeting with Putin in Moscow on Monday.

He added that his country wanted an expanded new mediation mechanism to substitute the Middle East Quartet which comprises the UN, the US, Russia, and the European Union.

The meeting comes amid anger among Palestinians at US President Donald Trump’s latest hostile measures in favor of Israel, including his decision last December to recognize Jerusalem al-Quds as the “capital” of the regime and begin work to transfer Washington’s embassy from Tel Aviv to the occupied city.

On January 14, Abbas said that Trump’s so-called Middle East peace efforts are the “slap of the century” after his recognition of Jerusalem al-Quds as Israel’s capital.

All rounds of talks between Israelis and Palestinians have stalled so far mainly due to the Tel Aviv regime’s refusal to stop its unlawful settlement expansion on the occupied territories.

Palestinians want the resolution of the conflict with Tel Aviv based on the so-called two-state solution along the pre-1967 boundaries. However, the Israeli officials insist on maintaining the occupation of Palestinian territories.