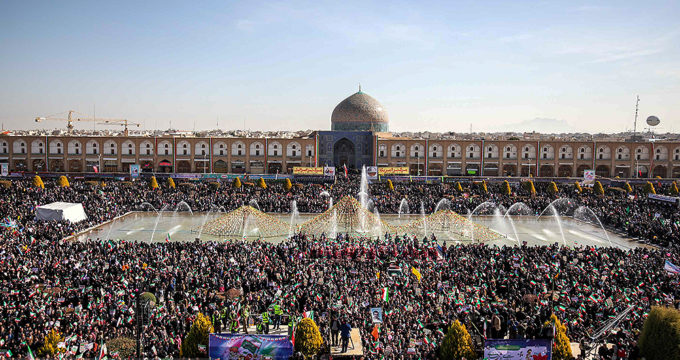 The periodic meeting of the campaign against financial support of terrorist groups within the framework of quadrilateral cooperation among Iran, Russia, Iraq and Syria was held in Baghdad.

Iranian Foreign Minister Mohammad Javad Zarif has said that four steps must be taken to solve the crisis in Yemen.

Iran’s Defense Ministry on Tuesday unveiled two homegrown maritime products, one used for propulsion of speedboats and the other for protection of metallic structures in military and civilian vessels.

South Korean officials say they will not provide Iranian and North Korean players with Samsung smartphones which are available free to all other athletes at the Winter Olympics starting Friday.

Macron’s visit to Iran to take place in near future

French Foreign Minister Jean-Yves Le Drian says that he will visit Tehran in March, adding the French President Emmanuel Macron will also visit Iran after his own trip.

Organizers of the Pyeongchang 2018 Olympic Winter Games in South Korea say they have formally apologized to Iran over an earlier decision to deny its athletes gift Samsung smartphones, which sparked diplomatic furor in Tehran.

U.S. secretly offered Iran a channel for talks on prisoners

The Trump administration secretly reached out to Iran in December to propose creating a direct channel to negotiate the release of prisoners held by each side, U.S. officials and people briefed about the discussions said, marking the first U.S. diplomatic overture to Iran on the issue under President Donald Trump.

Iranian President Hassan Rouhani says the United States will make a “big strategic mistake” if it decides to pull out of the 2015 multilateral agreement on Tehran’s nuclear program.

Millions of Iranians are taking to the streets nationwide today to mark the 39th anniversary of the Islamic Revolution in 1979.

Iran President: Huge turnout of people, response to US plots

Iranian President Hassan Rouhani praised the huge turnout of people in the Islamic Revolution’s anniversary rallies across the country and described it a response to the US conspiracies.

US is Iran’s No. 1 enemy: Iranian demonstrators

Iranian people continue to recognize the US as their ‘No. 1 enemy’ and condemn its violations of the nuclear deal, said demonstrators in a resolution at the end of their rally in commemoration of the Islamic Revolution anniversary on Sunday.

Iran displayed its home-made ballistic Qadr and Fajr 5 missiles during the nationwide rallies to celebrate the 39th anniversary of the victory of the Islamic Revolution on Sunday.

Total’s work on the South Pars gas project is well on track despite US threats of new sanctions on Iran, the French oil and gas group’s Chief Executive Patrick Pouyanne says.

IranAir is not having problems financing plane purchases from Boeing (BA.N) and Airbus (AIR.PA) but deliveries could be hampered if the United States does not extend export licences, Chief Executive Farzaneh Sharafbafi said on Thursday.

Peugeot has to procure 30% of parts for Algeria from Iran

French carmaker PSA Group has to procure 30% of auto parts at its Algeria site from Iran under its agreement with the country’s leading automaker Iran Khodro (IKCO), a car parts maker says.

Leaders of Turkey, Russia and Iran to discuss Syria in Istanbul: Turkish source

Turkey and Russia agreed on Wednesday that their next three-way summit with Iran to discuss the conflict in Syria will be held in Istanbul, a Turkish presidential source said.

The Syrian military has hit at least one Israeli F-16 warplane that attacked positions inside Syrian territory, sending it down in flames and smoke.

Russia’s President Vladimir Putin has urged the Israeli Prime Minister Benjamin Netanyahu to avoid any steps that would lead to a new confrontation in the region, following Israeli airstrikes on Syria.

The sporting community in Iran has expanded the space for women by introducing two new fields.

18 Iranian universities among best in Asia

When Samaneh Bayrami Baher marches in Pyeongchang on Friday for the opening of the 2018 Winter Games, she will be one of only four athletes representing Iran’s national colours.