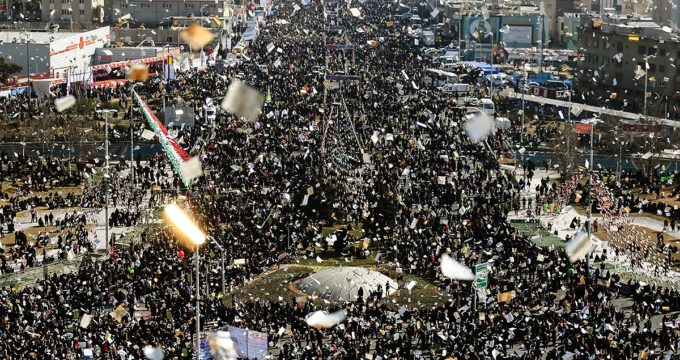 February 12, The Iran Project – Iranian people poured into the streets from early hours of Sunday (Feb. 11) morning for nationwide rallies commemorating the 39th anniversary of the victory of the 1979 Islamic Revolution.

People from all walks of life attended the countrywide rallies which began at 9 a.m. local time (05:30 GMT) to celebrate the nation’s victory that put an end to the monarchical rule of the US-backed Pahlavi regime.

The Supreme Leader of Islamic Revolution on Sunday highly praised the Iranian people for their massive turn out in today’s nationwide rallies marking the anniversary of Iran’s revolution.

Describing people’s massive participation in the revolution anniversary rallies as a great and dazzling incident, Ayatollah Khamenei said, “The grandeur of your demonstration today, which according to accurate estimates was more crowded than previous years, gave a firm and crushing response to foreigners and enemies and those with a weak resolve.”

Addressing the thousands of people on the streets of Tehran, President Rouhani said “In the course of the last year, we overcame terrorism. We achieved great victories over ISIL in the region. Our help to the people of Iraq and Syria fruited good results and the people of the region got rid of the evil of terrorists.”

Talking to reporters covering the rallies in Tehran, Shamkhani rejected the Israeli regime’s claims that Iran was involved in drone intrusion into Israel, describing the Syrian military’s downing of the Israeli jet heroic.

Meanwhile, Larijani said people presence is a valuable support for the country’s move, expressing hope that all Iranians will be united in the march toward the same goal.

Taking part in the demonstration of people in Tehran, Amoli Larijani said rallies on Islamic Revolution’s anniversary are a firm response to the enemies’ plots against the country, adding that huge popular turnout in the rallies showcased, once more, the national authority of the country .