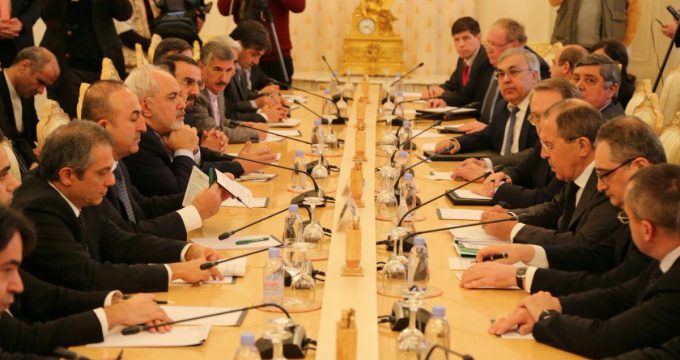 Turkey’s cooperation with Iran and Russia: Tactical or strategic?

Iranian Diplomacy | Kaveh L. Afrasiabi: More than two weeks since the start of Turkey’s Operation Olive Branch in northern Syria, lingering questions regarding Ankara’s ultimate aim remain. Denounced by Damascus, in a formal complaint to the UN, as a breach of Syrian sovereignty, Turkey’s on-going military intervention has raised the specter of an Israeli-style occupation of parts of Syria, which might well turn out to be much bigger than the Afrin enclave and, perhaps, encompass the other two Kurdish-held areas along the Syrian-Turkish borders.

Indeed, this much was clear in President Erdogan’s recent address to the Turkish Parliament, when he lamented the past territorial losses of the Ottoman empire and hinted at a long stay deep inside Syria, by invoking comparisons to US’s long stay in Afghanistan and Iraq.

Pledging to return the Kurdish-controlled territories to their “original Arab owners,” President Erdogan is seemingly contemplating a massive population displacement and remapping the balance of forces in north and northwestern Syria, thus preventing a contiguous Kurdish region along the vast, and porous, Turkish border that could imperil the country’s security, in light of the threats posed by the Kurdish opposition groups operating from inside the Syrian territory.

Simultaneously, Ankara continues its official policy of seeking regime change in Damascus and the departure of Bashar al-Assad, which essentially means that Erdogan’s kingmaking behavior in the Kurdish region may well prove to be a prelude for a more ambitious anti-Damascus long-term plan, given the fact that the Turkish invasion is openly assisted by the Free Syrian Army, not to mention the unconfirmed reports that even Arab terrorist groups including the ISIS fighters are involved as auxiliary force backing the Turkish military.

In turn, this raises serious questions of what happens if Operation Olive Branch drags on and turns into, if not a stalemate, a protracted invasion draining the Turkish government? Despite the present tensions with the US, Erdogan has optimistically stated that the “US will support us,” which might not be a tissue of wishful thinking, given Turkey’s robust NATO status, its anti-Damascus position, and its powerful military’s ability to create a safe zone for the host of anti-Damascus forces.

Over time, this would mean more, and not less, tensions with Turkey’s two key neighbors, i.e., Iran and Russia, that are due to attend a tripartite crucial meeting in Istanbul to discuss the developments in Syria. In preparation for this meeting, Mr. Erdogan has held telephone conferences with his Iranian and Russian counterparts, emphasizing the priority given to sustained trilateral cooperation that has led to the on-going Astana rounds and the establishment of the de-escalation zones’ concerning the latter, so far Turkey has set up several observation points in Idlib and, yet, the prospect of Turkey’s expansion of its military operation in that province may spell trouble for its peacemaking efforts.

For Iran, on the other hand, Turkey’s actions pose a serious dilemma as Tehran is threading a fine line between supporting Syrian sovereignty and Damascus’s opposition to Turkey’s breach of its territorial integrity on the one hand and, on the other, trying hard to assuage Turkey’s national security concerns and thus not to alienate Turkey, Iran’s gateway to Europe. Although President Rouhani has opted for semi-quite diplomacy with Turkey and Russia on Syria, the continued and (perhaps) expanding Turkish operation may force Rouhani to take a more assertive stance and draw the line on Syria, which has been Iran’s strategic ally for decades. After all, Syria stood solidly with Iran when Saddam Hussain invaded Iran in 1980 with the tacit support of western powers and, unlike Iran’s sub-strategic partnership with Turkey, Iran and Syria have signed a defense cooperation pact that remains confidential.

Naturally, there is a valid suspicion in Iran that the US might be maneuvering behind Turkey, which has strong military-to-military ties with the US, and the present surface tensions between Washington and Ankara could well be a clever facade to hide the fact that US is, substantively speaking, in league with Turkey over a Syria partition plan even if this means sacrificing the Kurdish chess pieces. president Rouhani in his recent telephone conference with Erdogan meaningfully expressed the hope that the bilateral Iran-Turkey relations can be “elevated to strategic level” on all fronts, i.e., implying that so far these relations are sub-strategic, compared to Turkey’s NATO status.

But, much depends on Turkey’s end-game in Syria, which can turn out to be quite harmful to the interests of Iran, Syrian government, and even Russia in the long-run, even though at present Erdogan appears committed to maintaining the regional alliance for peace in Syria, yet this policy is fraught with incoherence and contradictions, thus raising the distinct possibility that instead of a strategic upgrade in Iran-Turkey’s relations, an opposite downgrading may transpire in the future if Tehran’s call on Turkey to stop is military intervention in Syria continue to fall on deaf ears.