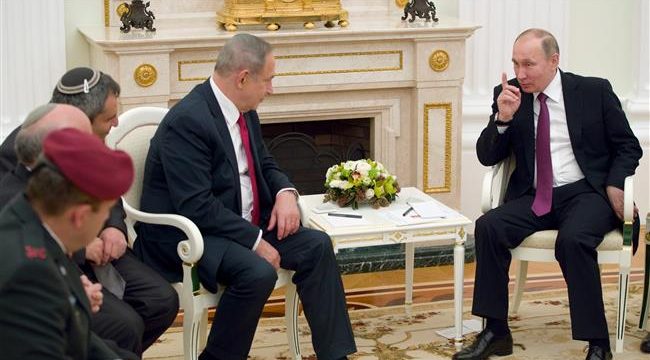 Press TV – Russia’s President Vladimir Putin has urged the Israeli Prime Minister Benjamin Netanyahu to avoid any steps that would lead to a new confrontation in the region, following Israeli airstrikes on Syria.

During a phone call on Saturday, Putin and Netanyahu discussed the latest developments in Syria, both concurring that interaction between the two countries’ militaries would be continued.

“They discussed the situation around the actions of the Israeli air force, which carried our missile strikes on targets in Syria,” Interfax quoted the Kremlin as saying.

“The Russian side called for any steps, which might trigger a new spiral of dangerous confrontations for all in the region, to be avoided,” the Kremlin press service said.

“I have recently spoken with Russian President Vladimir Putin,” Netanyahu said cited by his press office. “We agreed that security coordination between our countries will continue.”

In the autumn of 2015, Israel and Russia agreed to exchange data in order to safeguard their militaries against any accidental engagements during operations in Syria. A special coordination center was set up at Israel’s General Staff for the purpose.

On Saturday, the Syrian military downed an intruding Israeli F-16 warplane returning from a bombing raid on an army base in central Syria. The Israeli military confirmed that one F-16 had gone down in northern Israel, and that its two pilots had ejected and had been located and transferred to hospital. It later announced that one of the pilots was in serious condition.

The Israeli military claimed that it had attacked positions inside the Syrian territory after it intercepted a drone launched from Syria on Saturday. A pro-Syrian military alliance said later in the day that the Israeli claim about a drone intrusion was bogus, noting that Israel had targeted a drone base in Syria whose unmanned aircraft were used against the Daesh terrorist group.

Over the past years, Israel has frequently attacked targets in Syria, often claiming that it hit positions or convoys belonging to Iran. This is while Iran has no military presence in Syrian territory, only offering advisory military assistance to the Syrian government fighting an all-out foreign-sponsored militancy.