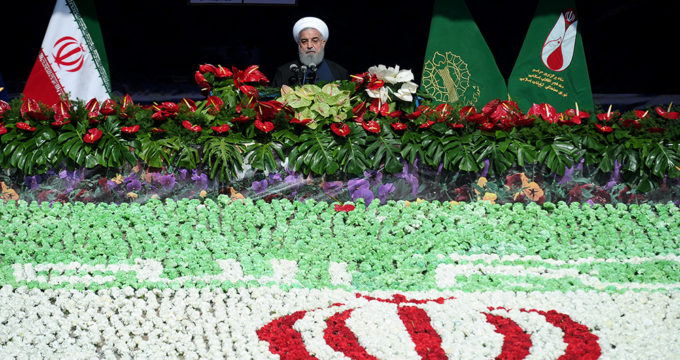 IRNA – Iranian President Hassan Rouhani said on Sunday that Tehran is committed to its obligations under the nuclear deal reached between Iran and G5+1 (US, UK, Russia, China, France plus Germany) in 2015.

‘Our nation is committed to its obligations till the time that the other side is bound to its obligations but if they aim to exit, they will be harmed,’ President Rouhani said to a gathering of people who attended rallies to mark the 39th anniversary of Iran’s Islamic Revolution in the capital, Tehran.

The president pointed to defeat of US plots to make unrests in Iran, manipulating the recent riots in a few cities and said, ‘Our people said no to them and deterred the Americans’ conspiracy by elevating their unity and solidarity.’

He also hailed the UN General Assembly’s opposition to the US bid against Palestine and said, ‘They wanted to declare Holy Quds as the capital of Zionist regime but the world stood against this conspiracy.’

At the present time, he added, the US and the Zionists are in a week position while stability in the region has been elevated.

‘We did not permit the conspirators to partition our friendly countries,’ the President said referring to plots aimed at partitioning Iraq.

‘They wanted to make long-standing unrests in Lebanon, but Lebanese people’s vigilance and friendly countries’ support, neutralized the US and Zionists’ plots.’

President Rouhani underlined Iran’s preparedness to boost peace and stability in the region and said political solution’ is the key solution to the regional problems.