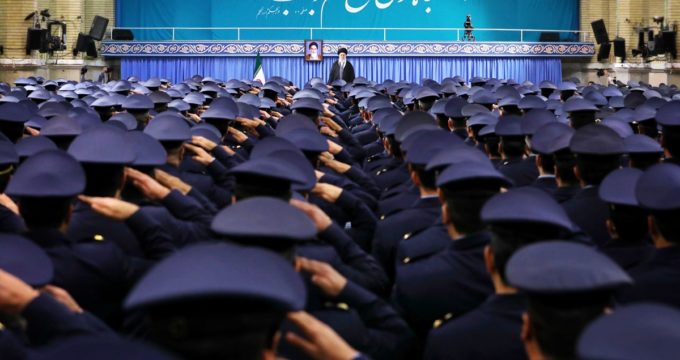 MNA – Ayatollah Khamenei predicted a grand turnout to this year’s Feb. 11 rallies in support of the Islamic Revolution due to the recent US anti-Iran remarks and the enemy’s pounce for an attack against the country.

Leader of Islamic Revolution received a group of commanders of the Army Air Force this morning on the anniversary of their historical allegiance with Imam Khomeini (Homafaran Allegiance), formed Feb. 8, 1979.

During the meeting, Ayatollah Khamenei predicted that people’s participation in this year’s Feb. 11 rallies on the occasion of the 39th anniversary of the Islamic Revolution would be grand and majestic, since the nation feels that the enemy is lying in ambush for an attack in regard to the recent anti-Iran remarks raised by some American authorities.

“The enemy aims to prevent the continuation and perseveration of our Revolution,” he said. “And they will use any means necessary to make that happen, from the pseudo-intellectuals that are paid to talk against the pillars of the Revolution, to mercenary writers and bogus theorists and clowns who use the cyberspace to expand their audience reach.”

Ayatollah Khamenei went on to add, “all these efforts and measures are not limited to the cyberspace. They also impose sanctions that affect the quality of our people’s lives. But the love for the Islamic Republic will bring people to the scene.”

The Leader then turned to the current domestic issues facing the country, stressing that “corruption must be fought against.”

“But it will be difficult to eradicate it,” Ayatollah Khamenei added. “It will not be easy to confront those benefitting from corruption. But this confrontation is necessary to carry out.”

“This Revolution is a popular one, and therefore, the people must be prioritized in all of the country’s plans and agendas,” he stressed.

The Leader further called on officials of the three branches of the Executive, Legislative, and Judiciary to follow up on the people’s demands and complaints in earnest.