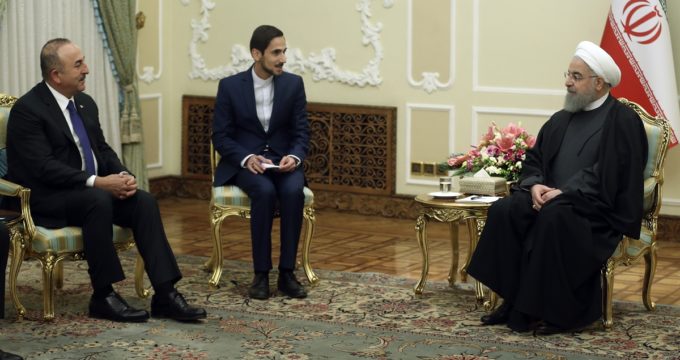 Cavusoglu first sat down with his counterpart Mohammad Javad Zarif on Wednesday and then met with President Hassan Rouhani later in the day.

In addition to the Afrin operation, the top Turkish diplomat was also expected to discuss with the Iranian side the latest regional developments, including the outcome of the Sochi talks on Syria.

The Syrian Congress of National Dialog was held in the Black Sea resort city of Sochi on January 29 and 30, with delegates from the Syrian government and opposition in attendance.

Among other issues on the agenda of the talks in Tehran was the further development of bilateral ties between Iran and Turkey in different sectors, including economic ties.

The one-day visit to Tehran by the Turkish official comes as Turkey has been pressing ahead with “Operation Olive Branch” in Syria’s northwestern region of Afrin in a bid to eliminate the Kurdish People’s Protection Units (YPG), which Ankara views as a terror organization and the Syrian branch of the outlawed Kurdistan Workers’ Party (PKK).

Iran has urged Turkey to stop the military offensive, saying the operation breached Syrian sovereignty and would fuel tensions in the war-damaged country.

Russia has also voiced concern about the Turkish military operation in Afrin.

Moscow and Tehran have both been offering advisory military help to Syria upon request from the Damascus government.

Meanwhile, the Syrian government has called the Afrin offensive, launched on January 20, an illegal act of “aggression” and said it would deal with it accordingly.