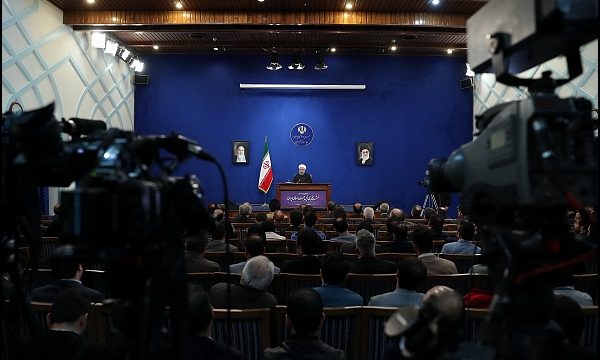 “We never regard other issues linked to the JCPOA (the nuclear agreement, officially known as the Joint Comprehensive Plan of Action). The JCPOA is a seven-sided agreement…The JCPOA is an international agreement which has been endorsed by the Security Council Resolution 2231,” Rouhani said at a press conference in the presence of Iranian and foreign reporters in Tehran on Tuesday.

He added that the JCPOA was such a solid agreement that US President Donald Trump has failed to fulfill his presidential campaign promise to tear it up since he took office some one year ago.

Trump has repeatedly described the JCPOA, which was negotiated under his predecessor Barack Obama, as “the worst and most one-sided transaction Washington has ever entered into,” a characterization he often used during his presidential campaign and threatened to tear it up.

Rouhani emphasized that the US president wrongly believes that the JCPOA is an agreement belonging to Democrats, saying, “The JCPOA is the commitment of the US administration regardless of any [political] party.”

He said any move by the United States to violate its obligations under the nuclear accord would discredit Washington itself.

In response to a question about the insistence of the US and the European Union on holding re-negotiations over the JCPOA terms and including Iran’s missile program in the deal, Rouhani said it is not possible to renegotiate or rewrite the agreement.

“It is meaningless to negotiate or discuss the JCPOA with anybody, whether the US and Europe or anyone else,” the Iranian president pointed out.

A senior Iranian official said on January 23 the idea of making revisions to the JCPOA is brazen, stressing that the suggestion is a mere delusion entertained by the US president.

A senior Iranian official says the idea of making revisions to the JCPOA is a delusion of the US president.

Secretary of Iran’s Supreme National Security Council (SNSC) Ali Shamkhani said Washington’s recent attempts to jeopardize the nuclear accord were illegal, adding that there is no possibility of renegotiating the JCPOA under any circumstances.

Elsewhere in the presser, Rouhani expressed the Islamic Republic’s firm determination to “develop and strengthen” its defensive capabilities and whatever is required for defense, including missiles and submarines.

He reiterated that Iran has never sought and would never intend to produce weapons of mass destruction.

Iran would only produce “conventional weapons” needed for defensive purposes and would “hold no negotiations with anyone in this regard,” Rouhani said.

Deputy Chief of Staff of Iran’s Armed Forces Brigadier General Massoud Jazayeri said in January the calls by the US and some of its allies for negotiations about Iran’s ballistic missile program and other defensive matters are “delirious.”

Iran’s defensive matters, including its ballistic missile program, are not negotiable and any calls in this regard are “delirious.”

He added that the countries that want to discuss the Islamic Republic’s deterrence power today are the same “regimes that have time and again proven their despotism and hegemony.”

The US president claims that Iran’s development of ballistic missiles is in breach of the nuclear accord.

Refusing to certify Iran’s commitment to the landmark agreement, despite condemnations and warning from world leaders, the American head of state has been pressuring France, Britain and Germany – all members of the European Union – to work out a “fix” to what he calls the “significant flaws” of the deal.

Officials from the three EU countries have formed a working group with US Secretary of State Rex Tillerson to explore their options before a three month ultimatum by Trump ends in May.

Iran’s Defense Minister Brigadier General Amir Hatami said in December the Islamic Republic would boost its military prowess with full strength and without any halt.

The Iranian defense minister says Tehran will boost its military prowess with full strength and without any halt.

Hatami added that the country has a long-term strategic outlook on its defense issues given the extent of the enemies’ plots.

Rouhani also urged the United States to stop its pressure, sanctions and threats against Iran and said Washington holds the key to its potential relations with Tehran.

“I believe that there is no doubt that the US seeks to create problems for the Iranian nation or government,” the Iranian chief executive said.

He added that the US turned the recent protests in Iran into a political and security issue and referred it to the UN Security Council.

It was the “first disgraceful defeat” of the current US administration after all countries in the Security Council opposed its representative’s remarks, he noted.

The UN Security Council on January 5 finally gave into a US push for a meeting on the latest events inside Iran, but the session did not go as planned as the council’s veto wielders and Washington’s own allies used the debate to criticize the White House for involving the council in Iran’s domestic affairs and seeking to link those issues to the JCPOA.

The US finds itself isolated at the UN Security Council meeting it pressed for on the situation in Iran, as the session backfired and turned into criticism of Washington.

At the session, US Ambassador to the UN Nikki Haley gave an exaggerated account of a series of scattered riots in some areas in Iran earlier in January, and said Washington would remain steadfastly behind the Iranian “protesters,” attempting to bring other UNSC members onboard with Washington against the Islamic Republic.

Some Iranian towns and cities were hit by scattered riots, which followed a series of peaceful demonstrations over economic issues.

However, Iranian law enforcement forces, backed by locals, intervened in time and ended the violence, which saw vandals and armed elements launch attacks on public property, mosques and police stations. Over a dozen people died amid the violence.

US seeks to partition Syria

Elsewhere in his remarks, Rouhani condemned the US presence in Syria and said, “They [US officials] have incorrect goals in the [Middle East] region and are considering the disintegration of Syria.”

He added that Iran does not accept any state’s move to “enter a country’s territory without its government’s permission.”

He said the US did not seek to dismantle terrorism in Iraq and Syria and suffered a defeat in the two countries; however, Iran enjoys positive relations with Russia, China and many regional countries that intend to fight terrorists.