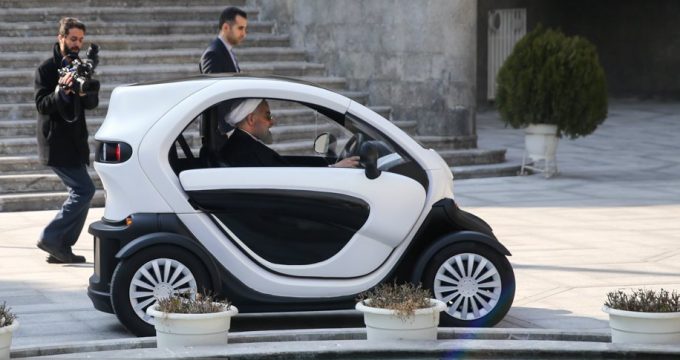 An unexpected thumbs down for Hybrids in Iran

Financial Tribune- As 2017 was coming to a close the government of President Hassan Rouhani passed an amended version of auto import rules and the unexpected happened. Import tariffs on hybrid vehicles were increased significantly.

The customs duty for such vehicles has been increased from 5% to 15-65%. This rule apparently sent a wrong message to the public in general and environmentalists in particular: the government is not serious about curbing the use of fossil fuels and improving the quality of air in the urban areas suffocating due to the air pollution.

Lawmakers realizing the damage the new rules can and will do have called on the government to rethink its decision and stay loyal to its oft-mentioned green policy.

The new government ruling categorizes hybrids into 16 groups with a short, vague and rather confusing description for each group. It has left even professionals and import companies scratching their heads about comes next and which import tariff will be applied to which model.

In an interview on Jan. 22, when questioned about the significant increase in hybrid vehicles import tariffs Rouhani said, “The vehicles that were imported [with low import tariffs] under the category of ‘hybrid cars’ were not real hybrids. The customs duty on hybrids is significantly low.”

Depending on engine capacity the import tariffs on HEVs vary between 25% to 65% while the duties on PHEVs are somewhat lower ranging between 15% to 55%.

HEVs and PHEVs use both an internal combustion engine and one or more electric motors.

The main difference between the two is about which engine is in charge. In HEVs the electric motor assists the internal combustion engine, while in the PHEVs, it is the other way round. Moreover, PHEVs are more environment-friendly and closer to a full EV.

HEVs get most of their power from the internal combustion engine. When needed, an extra boost of power can be obtained from the electric motor. The power required for the electric motor to work is generated on the go and stored in the battery.

The electric motor also acts as a generator, converting energy from regenerative braking and storing it in the battery. For instance, the most popular hybrid in Iranian market, Toyota Prius, is an HEV.

PHEVs get most of their power from the electric motor, which acts as the primary, while the internal combustion is the back-up.

True to its name, the PHEV needs a power outlet to get the battery charged to full capacity. The internal combustion engine can charge the battery to some extent. Not a single PHEV is available in Iran’s market.

As for a functional EV and PHEV charging infrastructure there are non in Iran so far.

The Energy Ministry’s Niroo Research Institute has designed and constructed a solar-powered electric vehicle and motorbike charging station. However, it does not offer services to the public yet and is in the trial phase.

Some of the EVs and PHEVs can be charged at home. NRI’s director for EV affairs Ali Bakhshi is of the opinion that “Powering electric vehicles would be a major challenge for the local electricity distribution network.”

Demand for clean energy is gradually gaining traction in many countries – both in the developed and developing world. Besides shifting to environmentally-friendly fuel and renewable energy sources, states are long in the process of keeping their roads clean by getting rid of fossil-fuel vehicles. Countries leading the campaign for clean energy are China, Germany, the UK, Norway, and France.

China has set a deadline of 2019 to impose tough restrictions on sales of fossil-fuel vehicles, a move aimed at pushing companies to speed efforts to help reduce oil consumption and pollution while developing electric vehicles for the world’s biggest auto market.