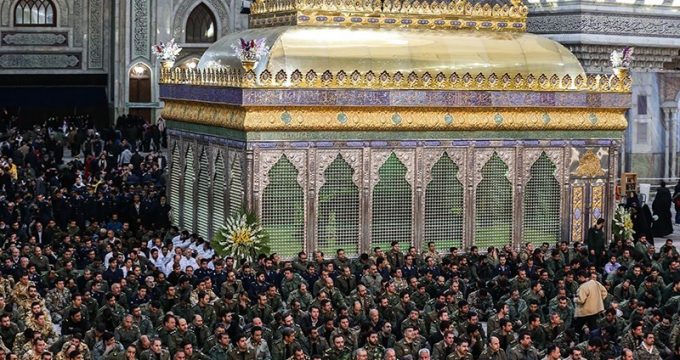 An 81-year-old Iranian-American man imprisoned in Iran, Baquer Namazi, has received a four-day leave from the Iranian government until Thursday after being discharged from a hospital, his lawyer said on Sunday.

Those created Daesh seeking to relocate it to Afghanistan: Ayatollah Khamenei

Leader of the Islamic Revolution Ayatollah Seyed Ali Khamenei highlighted the US role in the emergence of Daesh (also known as ISIS or ISIL) terrorists in the Middle East and said those who created the criminal group are seeking to move it to Afghanistan.

The 2nd Asian and Pacific Centre for the Development of Disaster Information Management (APDIM) started work here in Tehran on Tuesday.

Iranian Leader Ayatollah Seyed Ali Khamenei paid tribute to the founder of the Islamic Revolution and the respected martyrs.

Iranian President Hassan Rouhani and his cabinet members attended the late Imam Khomeini’s mausoleum on Wednesday to pay homage to the founder of the Islamic Revolution and the martyrs.

Iranians have started Ten-Day Dawn ceremonies across the country, marking the 39th anniversary of the 1979 Islamic Revolution, which put an end to the ruling of the US-backed Pahlavi regime in Iran.

Iran’s president denounced US officials’ fake sympathy for the Iranian people, mentioning Washington’s dark record of hostile moves, acts of invasion and plunder, and the cruel sanctions imposed on Iran for years.

An Iranian nuclear official says a team of Russian specialists will visit the Fordow enrichment facility on Sunday as part of a project on stable isotopes.

During the 29th meeting of the International Conference of Asian Political Parties (ICAPP) in Tehran many figures from around the world touched upon the political problems of the current world including extremism in the Islamic world.

Foreign Minister Mohammad Javad Zarif on Saturday warned of US hazardous nuclear policies, saying that they are bringing mankind closer to annihilation.

US talks of peace while threatening others with nukes

Iran’s President Hassan Rouhani criticized Washington’s “shameless” hypocrisy in talking about world peace all the while threatening other countries with its new nuclear arsenal.

Iran exports caviar to US

Iran announced that it has exported its prized caviar to the US after receiving the necessary license from the Food and Drug Administration (FDA).

Iranian market has a lot to offer to aircraft manufacturers

The uncertainty around the US position on Iran means that Iranian aviation industry’s true potential may not be realized any time soon, Saj Ahmad, an aerospace and aviation analyst at London’s StrategicAero Research, told Azernews.

President Rouhani described strengthening hope and spirit in the society a must and said: “It is very delightful and proud to see our country being in the first place in producing a product such as sponge iron”.

The parliament has approved a measure on Saturday to set the ceiling for using foreign investments in projects at $30 billion for the next Iranian fiscal year starting March 21.

Iranian Petroleum Minister Bijan Zangeneh announced here on Sunday that the country is to begin legal proceedings against Pakistan in a protracted gas pipeline project.

The United States has put the leader of the Palestinian Islamic resistance movement, Hamas, on its so-called terror blacklist and imposed sanctions on him, raising tensions in the region following Washington’s recognition of Jerusalem al-Quds as Israel’s capital.

Deputy Speaker of Iraqi Parliament Humam Hamoudi said that his country supports promotion of ties with Iran in a bid to strengthen its national industries.

Leader of Yemen’s Ansarullah movement Abdul-Malik al-Houthi has reiterated that Saudi Arabia and the United Arab Emirates (UAE), which are engaged in the war on Yemen, are serving the interests of the United States and Israel.

The Palestine Liberation Organization (PLO) has decided to withdraw recognition of Israel as Washington’s recent hostile moves against the Palestinians deepens the decades-long conflict in the occupied territories.

The Israeli regime has decided to set up “a vast network” of offensive missile systems that would be targeted against the resistance movement of Hezbollah in Lebanon, Israeli media claim.

For the first time, an Iranian writer has been invited to participate in the Munich Museum’s White Raven festival.

A group of women in Iran’s Chaharmahal and Bakhtiari province have built a 5-kilometre road to a remote village by doing tough jobs like operating cranes, graders, trucks, and tractors.

UN Under-Secretary General Shamshad Akhtar, who is also the Executive Secretary of the UN’s Economic and Social Commission for Asia and the Pacific (ESCAP), has held talks with Iran’s Foreign Minister Mohammad Javad Zarif in Tehran.

The 36th edition of the Fajr Film Festival opened in the Iranian capital of Tehran on Thursday with many cultural and cinematic figures in attendance.