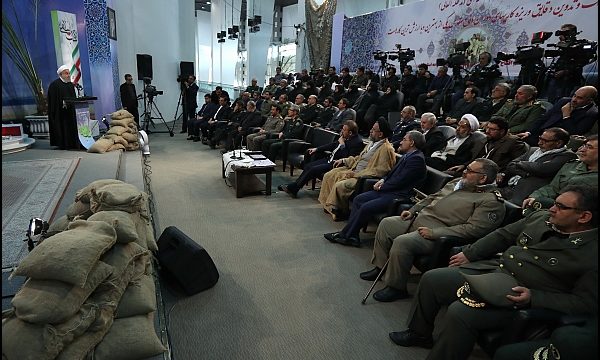 Iran’s coverage: We must be strong and powerful: President Rouhani

The Iranian President vowed continued efforts to boost the country’s military power within the framework of law and religious decrees, making it clear that Tehran will never ask permission from anyone to strengthen its defense capabilities.

Chairwoman and CEO of Iran Air, the country’s national flag carrier, Farzaneh Sharafbafi announced that the company will receive 14 more new passenger planes in the next Iranian year (to start on March 21).

Iranian Minister of Petroleum Bijan Zangeneh says the country’s petroleum output has increased by 165,000 b/d in the first 10 months of the current Iranian calendar year which began on March 21 compared to the same period last year.

Iran’s Judiciary Spokesman Gholam Hossein Mohseni Eje’i dismissed claims that Baqer Namazi, an Iranian-American, who was sentenced to 10 years of jail for spying and cooperating with the US government against Tehran has been released.

Four vessels with 16 crew members that had illegally entered the Iranian waters have been apprehended and handed over to officials.

The Public Relation Office of Iran’s Ministry of Foreign Affairs reacted to the accusations made by one of the local newspapers about the nuclear deal formally known as JCPOA calling it baselss.

Iranian Petroleum Minister Bijan Zangeneh announced here on Sunday that the country is to begin legal proceedings against Pakistan in a protracted gas pipeline project.

The underground missile facilities of the Islamic Revolution Guards Corps are invulnerable to all sorts of hostile attacks, IRGC Lieutenant Commander Brigadier General Hossein Salami said, noting that not all projectiles are stockpiled inside the missile cities.

Defense Min: US transfers ISIL from Syria, Iraq to Afghanistan

Iran’s minister of defense says the United States is trying to save ISIL by transferring its terrorist members from Syria and Iraq to Afghanistan to justify its presence in the region.