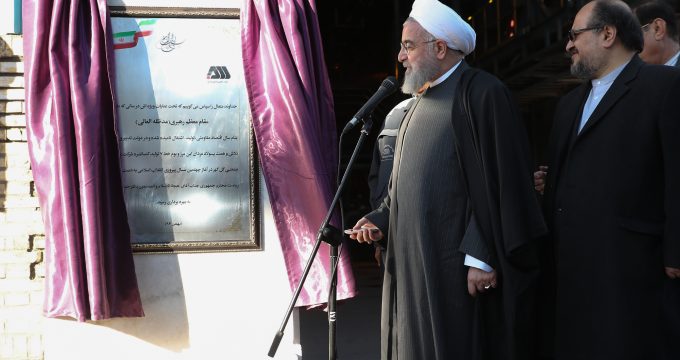 president.ir- President Rouhani described strengthening hope and spirit in the society a must and said: “It is very delightful and proud to see our country being in the first place in producing a product such as sponge iron”.

Speaking at the ceremony of opening developmental projects in Kerman province on Thursday, Dr Hassan Rouhani said: “We must continue the process of advancing various parts of our country step by step because the entire country is full of light and hope and in such an atmosphere there must be no speak of despair”.

He also said: “We must continue the process of advancing various parts of our country step by step and our problems must be solved by our own hands”.

“Golgohar region’s current condition is in no way comparable to the first years after the revolution and the current conditions of the region indicates Kerman people’s hard work,” continued the President.

Stressing that being in the first place in producing a product such as sponge iron is very delightful and proud, he continued: “We are independent in many products and all this brings us honour and pride”.

“Entire Iran is full of light and hope and in such an atmosphere there must be no speak of despair,” said the President.

No one cares about us except for ourselves, said Rouhani adding: “During the 8 years of the imposed war, no one in the world helped us and we defended ourselves on our own and were victorious. Today, as well, nobody in the world is after solving our problems so we must solve our own problems”.

He went on to say: “Today, more than $2.2bn worth projects were opened in Kerman province and to the same extent, new projects’ construction have started; this is not a small number”.

Underscoring that despite work done throughout the country, there may be shortcomings, he said: ”We must join hands to solve these problems. The government is not a certain organ, but includes the whole Iranian nation and everybody must work to solve the problems”.

“Our country has an Islamic ruling system and is away from the dictatorship conditions in some countries around the world. The people of our country can speak their opinions freely and give solutions for solving problems,” Dr Rouhani continued.

“In addition, before the JCPOA we could not get even one dollar of credit but today, we have $30bn of credit,” added Rouhani.

The President of the Islamic Republic of Iran also went on to say: “The Islamic Revolution and Sacred Defence was a wonder in the region and the world”.