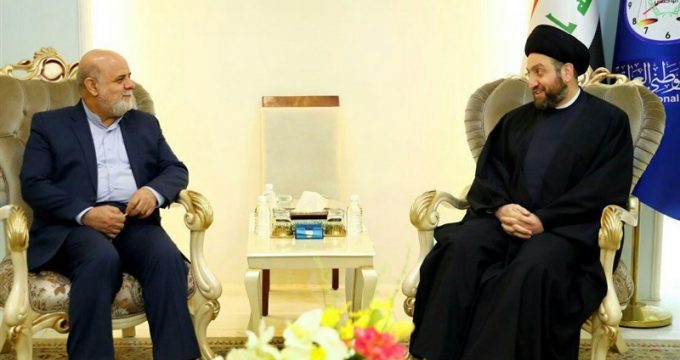 Tasnim – Iran’s Ambassador to Baghdad Iraj Masjedi and Leader of Iraq’s National Alliance Ammar al-Hakim weighed plans for closer cooperation between the two neighbor and discussed the latest developments in the region.

In a meeting in Baghdad, the Iranian ambassador and the Iraqi politician discussed the most recent political and security developments in Iraq and the region, and called for efforts to settle regional conflicts.

Exploring avenues for closer interaction between Tehran and Baghdad, they also talked about the process of reconstruction of Iraq in the post-Daesh era and contribution to its political and social prosperity.

Last month, in a meeting with Iraq’s parliament speaker in Tehran, Iranian President Hassan Rouhani called for stronger banking relations with Iraq to allow for a growth in the bilateral trade and economic cooperation.

Iran, a close ally of Iraq, supported the Arab nation in the fight against Daesh (ISIL) since the terrorist group invaded Iraq in summer 2014.