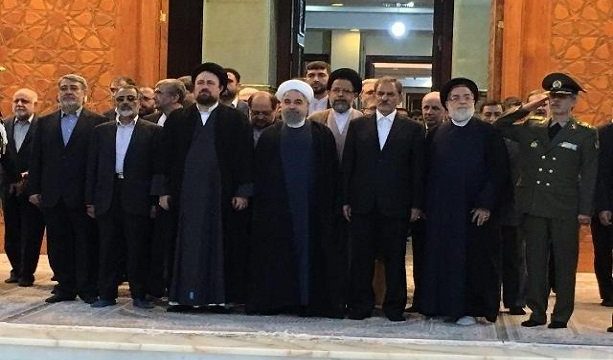 MNA – Visiting the Mausoleum of Imam Khomeini on the anniversary of the days before the victory of the 1979 Revolution, President Rouhani hailed the rule of people over people in Iran.

“The officials and managers in the country should have open ears to listen to what the masses want and demand,” said Iranian President Hassan Rouhani.

He made the remarks on Wednesday morning at Imam Khomeini Mausoleum in the southern outskirts of Tehran.

“Forty years ago, on a day like this, nobody could believe that a revolutionary and religious movement would gain victory in this country to topple an armed to the teeth regime. This Revolution proved to the world that people can govern over their own fate,” asserted the Iranian head of state, on days approaching the anniversary of the victory of the 1979 Islamic Revolution in Iran which put an end to 2500 year old monarchy in Iran in favor of a long-waited democracy.

“The former regime could have never imagined, especially when they were cheering with the lords of the world playing with cultural and religious emotions of the people calling Iran the island of stability in the region, that the beloved of the nation in voyage (Imam Khomeini) after years of being in exile in Turkey, Iraq, and France would return to the country under such circumstance and would topple Shah’s establishment thanks to the sacrifice of Iranian nation,” reiterated the Iranian president.

“All those who held political and military positions were required to obey nobody except the Shah, but our people with the help of Imam created a democratic establishment under the auspices of Islam,” noted Mr. Rouhani.