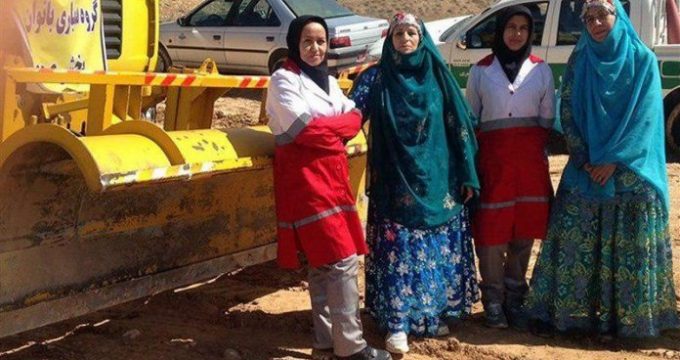 IFP – A group of women in Iran’s Chaharmahal and Bakhtiari province have built a 5-kilometre road to a remote village by doing tough jobs like operating cranes, graders, trucks, and tractors.

There are still many remote villages across Iran where a small incident or a change of season blocks roads, and as a result the residents cannot commute. Gol-e-Sorkh in Chaharmahal and Bakhtiari province is one of such villages.

With the first winter snow, the roads have been blocked and the residents’ tragedy began again, a Farsi report by the Shahrvand daily newspaper said.

Villagers say no physician can come to the village no matter whether the people are sick or pregnant.

However, this time women in Gol-e Sorkh have gotten involved and worked with heavy equipment vehicles every day from 7 am to 7 pm for a month to open the village’s access to the outside world.

These women have finally coped with the situation by building a five-kilometre road to the village, of course with the help of other residents. During the construction, other women of the village were preparing food for them at a boarding school while police and architects came to their aid as well.

One of these women, who is a grader operator, says she and her colleagues first went there as rescuers.

“Then we saw how difficult the commuting is; therefore, we decided to get the job done. However, the men disagreed and told us women are not able to do such things. We insisted and finally they agreed.”

Mina Moqaddam has been in charge of digging in the project. “We started the job last year. The men were outside the village and the problems had increased. So, we decided to come here and help,” she added. Mina has lived for many years in the US. “In the US women can do any type of job. Gender differences do not make sense, and in some cases women’s wages are higher than men’s.”

Fathi is another member of the team who has worked as an ambulance driver. She says, “Even the women of the village were against us at the beginning. They wondered if we could do such a thing! They advised us to get back to the kitchen and do the chores, but they gradually agreed and began to prepare food and tea for us.”

Rezapour, another woman who has worked as a relief worker, says, “We have to know everything; we must know how to work with the heavy equipment and also how to clear the way to help the injured.”

Hossein Jamshidi, the General Manager of Chaharmahal and Bakhtiari’s Roads Department, says this is the first time that women are building roads in Iran.

“Such a move by women of Shahr-e Kord is exceptional. This is not the first time that women have outpaced men in doing the country’s executive affairs and would not be the last. We do believe in women. We know that they can undertake tougher projects as well,” noted Jamshidi.