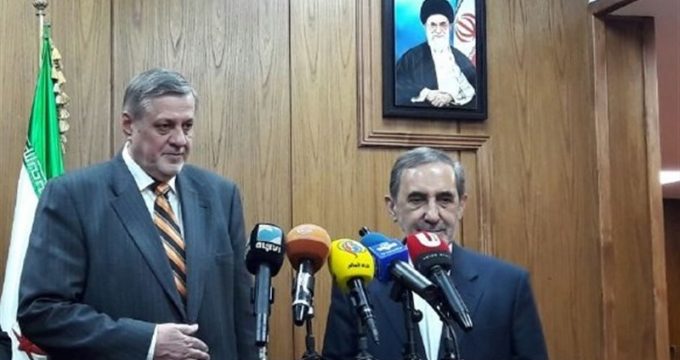 FNA- Iranian Supreme Leader’s top aide for international affairs Ali Akbar Velayati blasted Washington for inflaming conflicts in the region, warning that the US military deployment in Syria is aimed at disintegrating the Arab country.

“The Americans, with the support of certain regional elements, the Zionists and the al-Saud, have made attempts since 7 years ago to occupy Syria, overthrow its legal government and disintegrate the country to establish security for the Zionist regime,” Velayati said in a meeting with UN Special Representative for Iraq and Head of the United Nations Assistance Mission for Iraq (UNAMI) Jan Kubis in Tehran on Saturday.

He stressed that most terrorists in Syria have been defeated by the Syrian army and its allies, and said, “The Americans have now directly stepped onto the scene and deployed their forces on Eastern Euphrates and want to disintegrate Syria by inciting certain groups.”

Yet, Velayati stressed that the US is destined to experience defeat and failure again in Syria as Washington and its allies are much weaker than the past.

In similar remarks earlier this month, Velayati played down the US attempts to separate the Kurdish areas from Syria, stressing that the resistance front will prevent Syria’s disintegration.

“The Americans have set up bases in the Eastern parts of the Euphrates and want to pave the ground for the separation of Syria’s Kurdish areas from the country but it is a wish that will not come true,” Velayati said in a joint press conference with Leader of the Supreme Islamic Iraqi Council Humam Hamoudi in Tehran.

He said that the experience of war against Syria in the past 7 years has shown that the US will not succeed in implementing its plots, adding, “Syria will remain united and integrated and the resistance front will support Syria’s territorial integrity.”