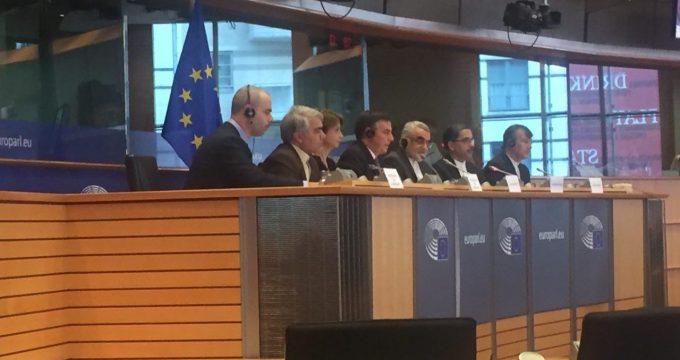 In a meeting with McAllister, the Iranian lawmaker stressed the need for full implementation of the Joint Comprehensive Plan of Action (JCPOA) and Europe’s practical encounter with US policies.

“Time is ripe for the EU to take decision in line with its interests and independently from the US and EU’s repeated opposition to US anti-JCPOA policies are good signs to that effect,” he said.

McAllister, for his part, said, “We strongly support the Joint Comprehensive Plan of Action (JCPOA) as a creditable international pact and believe that Europe can enhance cooperation with Iran in this context,” he stated.

Meanwhile, in a meeting with Maelen, Boroujerdi underlined the need for full implementation of JCPOA, calling for effective steps on the part of the European states, especially Belgium, to counter US President Donald Trump’s destructive policies.

Both officials also highlighted the role of parliaments in backing promotion of cooperation with a focus on economic relations.

Maelen described supporting JCPOA as a significant basis for cooperation between Iran and Europe, stressing the necessity for the two countries to counter terrorism and extremism.

In a separate meeting with Bracke, Boroujerdi recalled Iran-Belgium historic relations, saying that in post-JCPOA era, a new atmosphere has been created for broadening of ties with EU and it should seize the opportunity.

Bracke also referred to numerous opportunities for cooperation with Iran, noting  that dialogue and constructive interaction are essential for both sides.

Addressing the 7th EU/Iran Inter-Parliamentary Meeting, Boroujerdi called on the European countries to “practically”support implementation of the July 2015 nuclear deal.

For his part, Lewandowski described his latest visit to Iran as productive, and said that dialogues are the best ways for parties to adopt closer stances.