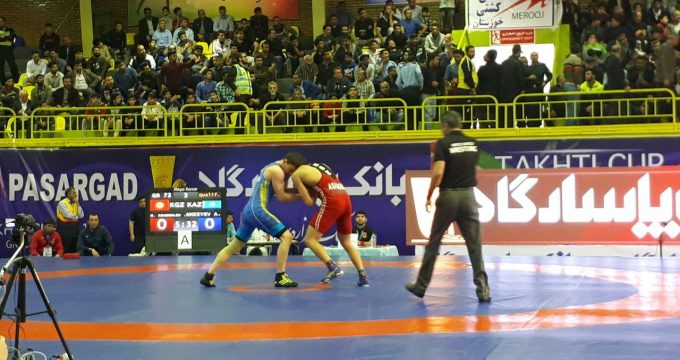 Iranian Greco-Roman wrestlers have put out magnificent performances at the 38th edition of International Senior Greco-Roman Wrestling Tournament ‘Takhti Cup’, which was held in honor of late legendary Iranian freestyle wrestler Gholam Reza Takhti who passed away half a century ago, and have been crowned as the champions of the event.

According to Iran Wrestling Federation website Iawf.ir, a total of 127 wrestlers from Iran and 11 countries attended the games and collected 192 points. Iran emerged as the champion of the 38th edition of International Senior Greco-Roman Wrestling Tournament ‘Takhti Cup’ held between January 25 and 26, 2018.

Iran had four wrestlers among the finalists three of which won gold medals and one took silver. Eight other medals were bronze.

Mohammad-Ali Garaei in the 77kg category, Saman Azizi in the 87kg, and Behnam Mehdizadeh in 130kg grabbed the gold medals by defeating their rivals. The single silver medal for Iran was given to Mehrdad Mardani.

Moslem Naderi and Reza Khedri in 55kg category, Mohammad Nourbakhsh in the 63kg class, Mohammad Eliasi in the 67kg category, Farshad Belfakah in the 72kg class, Ali-Akbar Heidari in 97kg, Shahab Ghourehjili in the 130kg won the bronze medals for Iran’s caravan.

As the Takhti Greco-Roman Cup has entered the United World Wrestling annual ranking series list, the tournament attracted world and Olympic champions and gave the event an elevated status compared to previous editions.

Turkey with 171 points finished second and Kazakhstan with 145 points was third.