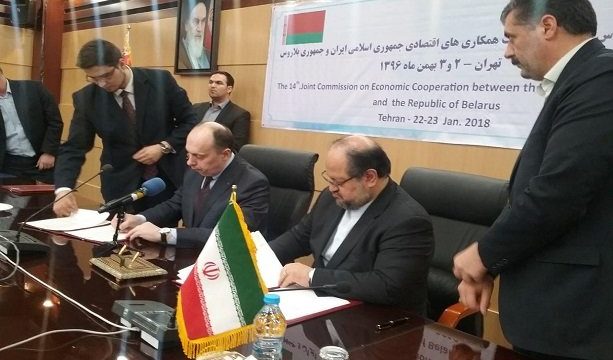 January 25, The Iran Project – Iran and Belarus have recently signed eight memoranda of understanding expanding from medical cooperation to car manufacture during a joint economic commission on Tuesday (Jan. 23) in Tehran.

The agreements call for cooperation in the fields of industry, car manufacture, medicine, oil and gas, agriculture, and regional cooperation.

Meanwhile, Shariatmadari told reporters on Tuesday that Iran and Belarus have signed a roadmap for bilateral cooperation for 2018-2020.

Furthermore, prior to this, the two countries had reached an economic cooperation roadmap for 2016-2017 with the aim to raise their mutual trade value to $250 million by the end of 2017.

In a meeting with Vovk, Zanganeh said that Belarus has received nearly two million barrels of oil in two consignments. He said that Belarus is interested in buying more oil from Iran, noting that International Affairs Department of National Iranian Oil Company is currently negotiating the matter.

The Belarusian Minister stated that Iran and Belarus have had constructive talks for forming a joint working group since the last time the two ministers met last year.

“In the post-JCPOA era that has provided us with a good opportunity to develop our relations with different countries of the world, there is no doubt that Iranian friends, including Belarus, have a privileged position and special importance for cooperation in various fields,” Jahangiri said, expressing Iran’s appreciation for Belarus’s support during the hard time of the sanctions.

Vovk, for his part, expressed his country’s readiness to cooperate more on production of tractor and combine-grain trucks and exporting Belarusian dairy products to Iran.