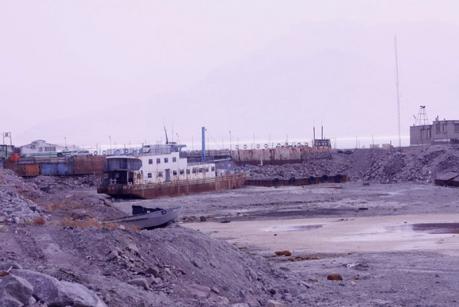 Press TV – Some major Iranian cities will be facing water rationing and other mandatory restrictions if the worst dry spell in more than 50 years persists.

With a third of the winter already gone, the Alborz mountains towering over Tehran which are usually blanketed in a snow covering at this time of the year barely have a dusting over them while the wider Tehran plateau has only seen some sparse rain so far this year.

“If the status quo continues in the coming months of the year and the spring, we will have to ration drinking water in some big cities,” a member of the presiding board of the Agriculture Commission Jalal Mahmoudzadeh was quoted as saying Monday.

Energy Minister Reza Ardekanian was quick to assure that Tehran, a sprawling megacity of 14 million, was not about to see any water cuts this summer when temperatures soar and consumption surpasses supply capacities.

However, while Tehran enjoys the luxury of several dams which drain water from the aquifers beyond the city’s limits, most other cities face scarce supplies.

According to Managing Director of Iran’s National Water and Wastewater Engineering Company Hamidreza Janbaz, more than 540 cities were on the brink of water stress last year but the problem seems far worse this year.

“Day by day, the challenges of the water sector become so diverse that the country teeters on the verge of a climate change leading to a decline in precipitations and rise in population. Under the current situation, it is impossible to tackle the existing challenge with former management capacities,” he said.

Across the vast country, rainfall has been normal only in the provinces of Ardabil and Golestan in the north, Deputy Energy Minister Rahim Maydani said last week.

Some provinces such as Khuzestan – known to historians as the ancient land of Elam with its fertile plains bearing many agricultural crops such as sugar cane from which the province takes its name – have seen precipitations drop by 30-80 percent.

Even the Caspian region which receives the highest precipitation in Iran, ranging from over 2,000 millimeters in Gilan and Mazandaran provinces, are not unscathed.

Mazandaran Governor Zabihollah Zakeri has appealed to Friday prayer leaders to preach water conservation during their sermons because of the “worrying” decline in rainfall in the province.

Elsewhere in South Khorasan, Friday prayer leaders have already initiated outdoor services of supplicating for rain. Photos of a man holding a lamb and solemnly asking God for rainfall in Birjand has gone viral on social media.

According to state news agency IRNA, South Khorasan has witnessed a drop of 81 percent in rainfall from a year ago. The region is an agriculture-based province where drought and water shortage directly affect people’s sustenance.

Shrinking rainfall is not Iran’s only challenge. Years of wrong cultivation patterns have exhausted the country’s water tables. Cheap electricity and other state subsidies have encouraged farmers to plant water-intensive crops like wheat and melons.

Rice paddies in the southern Shiraz province are still one of the curious sights, where Iran’s iconic qanats are being used to irrigate farms.

Qanats are a sophisticated network of tunnels invented by Iranians during the first millennium BC to carry water from aquifers in the mountains to farms. The system saved water from evaporation and leakage – a phenomenon which is now prevalent in Iran’s agriculture sector which uses up more than 90 percent of water resources, according to officials.

Other development programs have only aggravated the situation. Excessive damming has shrunk more than 90 percent of Lake Urmia, the Middle East’s largest saltwater body. Elsewhere, the water in a dam built in Khuzestan is not suitable for irrigation because it has been built on salt beds.

Moreover, water from the Karoun river has been diverted to increase the flow of Zayandeh-Rud but the river cutting through Isfahan in central Iran has dried up while the meandering Karoun has turned into a trickle.

There are further grandiose projects in the works, including a plan to pump water from the Caspian Sea or the Persian Gulf into the desert in central Iran, which has generated ecological concerns.

Water depletion in Iran is one of the highest in the world, where the government expects a 25 percent decline in surface water runoff by 2030.

Add to this wasteful patterns in major cities and towns and Iran faces a race against time to tackle its serious water shortage challenge.