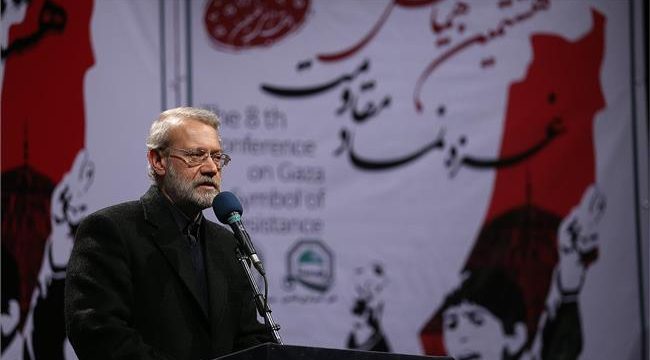 Israel menace to national security of all countries: Iran’s Larijani

Press TV- Iran’s Parliament Speaker Ali Larijani says the Israeli regime is a permanent menace for the national security of all countries.

Addressing the 8th Conference on Gaza, Symbol of Resistance in Tehran on Tuesday, Larijani added that the Israeli regime seeks to harm the economy of countries.

He said Iran is supporting the Palestinians because they are an oppressed Muslim nation plagued by the Tel Aviv regime which has expelled them from their country.

Palestinians are living in poverty in camps in Lebanon, Syria and other countries and have lost their homes, assets and jobs, he added.

The top Iranian parliamentarian emphasized that defending the Palestinian people is an Islamic, human and moral duty.

“Israel is also regarded as a danger in terms of security and national interests,” Larijani said, stressing that the Israeli regime must be resisted or it would continue to push forward further and further.

Leader of the Islamic Revolution Ayatollah Seyyed Ali Khamenei on January 16 warned of the important issue of Palestine being totally ignored by the international community and said the Palestinian cause is among the main issues of the Muslim world.

Ayatollah Khamenei says the recent US overstepping of its bounds on al-Quds will lead nowhere.

Ayatollah Khamenei said, “In the Palestinian issue, the three incidents of ‘land occupation’, ‘mass expulsion of millions of people’ and ‘massacre and horrible crime against humanity’ occurred.”

The Leader emphasized that the Muslim world must now play a role in “important and fundamental issues” and prevent the reoccurrence of the “bitter experience of the past decades and dominance of powers and their long-term effects.”