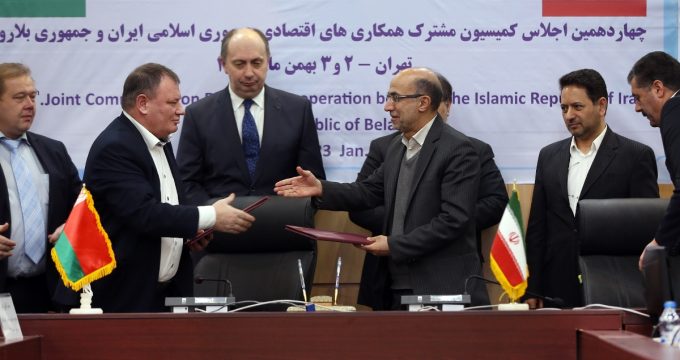 The event was attended by Iran’s Minister of Industry, Mines and Trade Mohammad Shariatmadari, Belarusian Industry Minister Vitaly Vovk, Belarusian Deputy Minister of Agriculture and Director of the Veterinary and Food Control Department Ivan Smilgin as well as Ex-Ambassador of Belarus in Iran and Head of Asia, Africa and Latin America section in Belarusian Foreign Ministry Victor Reebok  at Tehran’s International Fairground.

Over the past 11 months, several steps have been taken to develop cooperation, Vovk stated, adding that Belarus is waiting for Iran to sign an agreement with Eurasia.

Meanwhile, Shariatmadari revealed the opening €50 billion worth of credit for exporting Iranian products to Belarus.

Fortunately, there is a good banking relationship between the two countries of Iran and Belarus, he noted, adding, “issuance of guarantee letter, transfer of money and SWIFT (Society for Worldwide Interbank Financial Telecommunications) system have been established between banking industry of the two countries but the brokerage level is not yet satisfactory.”

In another development, Smilgin said that agricultural trade volume between Tehran and Minsk from January to November 2017 reached to 14.5 million dollars, which shown 58 percent increase.

Smilgin said most of the trade volume belongs to agricultural products import from Iran mainly fruits and vegetables.

He said one of the fields to increase joint investment plans were projects to fish farming trout.

In spite of this figure, both presidents expect more in trade development between the two states, Reebok underlined.