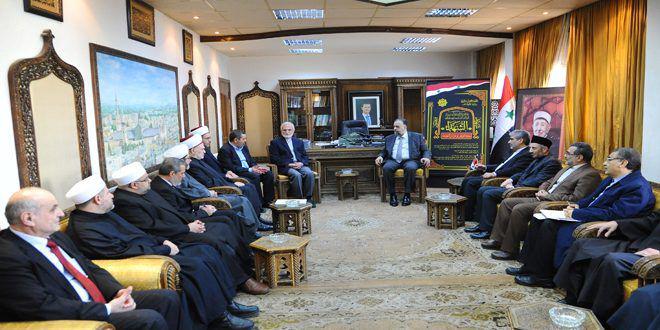 Muslim scholars in Syria and Iran are cooperating to fight terrorism, takfirism and the ugly face that US, Zionists and Arabs are trying to make of Islam, Mohammed Abdul Sattar said in a meeting with Iranian former foreign minister and Head of Strategic Council on Foreign Relations Kamal Kharrazi.

The arrogance front is hiding under the cloak of Daesh and other terrorists aiming to blow Islam, he said.

He called for Iran and Syria to present a clear view of Islam and the unity among Muslim scholars.

Meanwhile Kharrazi, for his part, appreciated the deep relations between the two countries for reinforcing thoughts, unity and proximity of Islam.

Iran has always stressed on unity among Muslims and Islamic denominations, he said.

Islamic unity can portray a true, moderate and shining image of Islam, he added.