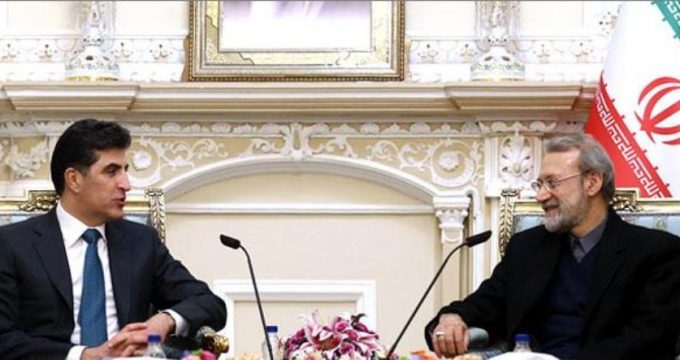 Speaker: KRG should exist within framework of Iraqi Constitution

IRNA – Majlis (Parliament) Speaker Ali Larijani said on Sunday that Islamic Republic’s strategy is that a dynamic and active Kurdistan Regional Government (KRG) should exist within the framework of Iraqi Constitution.

In a meeting with KRG Prime Minister Nechirvan Barzani on Sunday, he added, “We have had close and brotherly ties with our Kurdish brothers and will continue to have such ties. The security of Iraqi Kurdistan is of high significance for us.”

“We have a strategic relationship with you and are interested in maintaining it, as it is valuable and should not be damaged by strategic mistake,” Larijani told Barzani.

Larijani further pointed out that the events happening recently in Iraqi Kurdistan were not in the interest of Kurdish brothers and they should be solved through prudence and support of the central government.

Highlighting KRG’s economic activities, he said however, its political policies should be implemented in coordination with the central government.

Stressing the need for maintaining unity between Shias and Sunnis, Larijani said that the unity and integrity of Iraq can be forged by the unity between Shia and Sunni brothers.
Larijani hoped that KRG’s differences with the central government would be patched up soon and upcoming parliamentary elections will see a massive turnout in cooperation with the central government.

Barzani, for his part, said that during a trip to Baghdad, he held several meetings which opened the way for dialogue between KRG and the central government.

“Our issues with the central government should be solved within the framework of Constitution, as we favor integrity and territorial integrity of Iraq,” he said.

“We want to be part of the unified Iraq so that the enemies will not be able to take advantage of such a distance,” he said, hoping that problems would be solved in cooperation with friendly countries.

Appreciating the Islamic Republic for its supports for Iraqi Kurds, Barzani said that reopening of the borders made the people of Iraqi Kurdistan happy.

“We visited Tehran to send this message to our people that we will not allow our close bonds with Iranian brothers to be damaged,” he said.

“We are ready to open a new page in our relations and will make use of past events as experiences for building future,” he said.