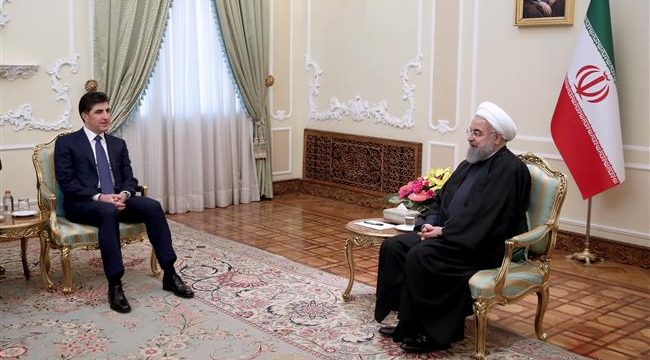 Referring to the mutual interest and historical relations between the people of Iran and Iraq, the Kurdish region in particular, Shamkhani stated that despite foreign enemies’ plots and sedition, the two nations are developing strategic relations.

Barzani, for his part, said “the relations between Iran and Iraqi Kurdistan is historical, and the Kurdistan region is proud of having a friendly relationship with the Islamic Republic of Iran.”

Iraqi Kurdistan prime minister highlighted that the relations and cooperation between Iran and the Kurdistan region will not be affected by hostile groups and he promised they would prevent any security threats against Iran.

Meanwhile, in a meeting with Barzani, Larijani noted that Iran values the friendly and strategic ties with Iraqi Kurdistan region and seeks to preserve the relations.

During the meeting, Larijani stressed that the strategy of the Islamic Republic of Iran is for the existence of an active and flourishing Kurdistan region within the framework of Iraq’s Constitution, adding “we should not allow strategic mistakes to harm the good relations between Iran and the KRG.”

Barzani, for his part, stressed KRG’s wish for preserving the territorial integrity of Iraq, adding that the current issues between the Kurdistan region and Iraq’s central government should be settled within the framework of the Constitution.

“We, too, want to be a part of the united Iraq so that our enemies could not use this distance to their own advantage,” he said.

Barzani further thanked Iran for its support and the reopening of its borders with Kurdistan region.

At a Sunday meeting with Nechirvan Barzani, Rouhani said “all regional countries and ethnicities are duty-bound to defend a federal administration and help secure border demarcations in the region.”

“Indisputably, extra-regional powers and forces do not and will not feel any sympathy for people of the region,” said the Iranian chief executive.

The president pointed to attempts by foreigners at destabilizing the region and rendering it insecure, and emphasized regional cooperation to counter the push.

The chief executive also asserted that all regional ethnicities, including the Iraqi Kurds, should exercise their rights within the framework of their respective countries’ constitutions and territorial integrity.

The prime minister of the Iraqi Kurdistan region, for his part, said that all the different sides have to remain committed to the Iraqi Constitution and seek to find solutions within the framework of the Constitution.

In September 2017, the KRG defied stern warnings from Baghdad and several other states, and held the referendum on separation from mainland Iraq. Kurdish officials said a majority of people had voted ‘Yes’ to secession.

Israel was the only foreign entity that voiced support for the secessionist push.