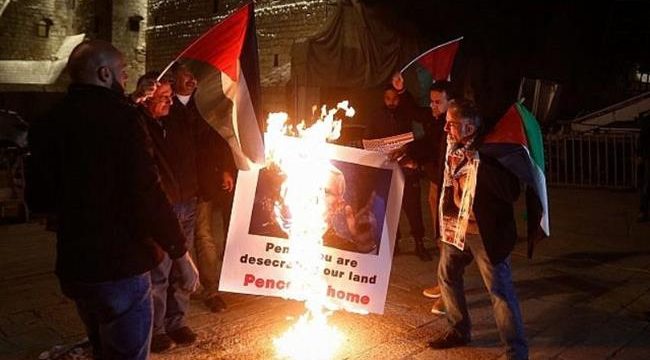 Press TV- Palestinians have taken to the streets of the West Bank city of Bethlehem to protest US Vice President Mike Pence’s visit to Israel, burning his photos over Washington’s decision to recognize Jerusalem al-Quds as the Israeli “capital.”

The protesters gathered in Bethlehem’s Manger Square outside the Church of the Nativity on Sunday night after Pence arrived in Israel earlier in the day for a two-day visit. They carried signs that read “Pence you are desecrating our land” and “Pence go home.”

They also cheered and waved Palestinian flags as a large photo of the vice president burned on the ground.

The visit comes as part of Pence’s Middle East tour which included Egypt and Jordan amid outrage over President Donald Trump’s globally condemned decision to recognize Jerusalem al-Quds as the so-called capital of the Israeli regime.

Pence’s trip had been scheduled to include a visit to Bethlehem, but the Palestinian Authority is boycotting it. The visit was initially scheduled for December before being postponed.

After the US move on Jerusalem al-Quds, Palestinian President Mahmoud Abbas called off a meeting with Pence scheduled for mid-December to protest the decision.

Last month, Trump announced his decision to recognize Jerusalem al-Quds as Israel’s “capital” and relocate the US embassy in Israel from Tel Aviv to the occupied city.

Pence on Monday met Israeli Prime Minister Benjamin Netanyahu, who described him as “a great friend of Israel”.

Later on Monday, Pence was to address Israel’s parliament (Knesset) whose Arab members said they would boycott his speech.

Pence landed at Tel Aviv’s Ben-Gurion Airport on Sunday, marking the highest-level visit by a US official to the region since Trump’s decision to move the American diplomatic mission from Tel Aviv.

Al-Quds remains at the core of the Israeli-Palestinian conflict, with Palestinians hoping that the eastern part of the city would eventually serve as the capital of a future independent Palestinian state.