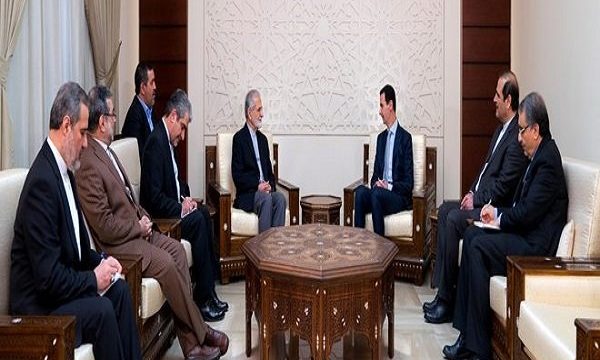 Turkish aggression on Afrin is nothing new: Assad

MNA – Syrian president Bashar Assad said that the flagrant Turkish aggression on Afrin is in continuation of its aggressive policy which adopted since day first of the crisis against Syria.

Syrian President Bashar al-Assad made the remarks in a meeting with the Chairman of Iran’s Strategic Council on Foreign Relations Kamal Kharrazi on Sunday in Damascus, Syrian SANA reported.

During the meeting, President al-Assad said that victory over terrorism in Syria and Iraq, along with Iran’s resilience in the nuclear issue, foiled the plot devised for the region that sought to fragment its states, violate their sovereignty, and seize control of their independent decision-making.

He also said that Iran’s support for Syria in all fields, particularly in fighting terrorism, contributed to the successes achieved by the Syrian Arab Army against terrorism.

President al-Assad noted that the flagrant Turkish aggression on the Syrian city of Afrin cannot be isolated from the policy adopted by the Turkish regime since the first day of the crisis, a policy which was based in the first place on supporting terrorism and terrorist organizations under various names.

For his part, Kharazi congratulated President al-Assad and the Syrian people for the victories achieved against terrorists, the most recent of them being recovering Abu al-Dohour airport, voicing confidence that more achievements will follow both on the political and military levels.

Kharazi stressed the importance of Syria and Iran continuing to exchange viewpoints and cooperate closely to confront foreign conspiracies, saying that the Syrian-Iranian harmony played a positive role in this regard.