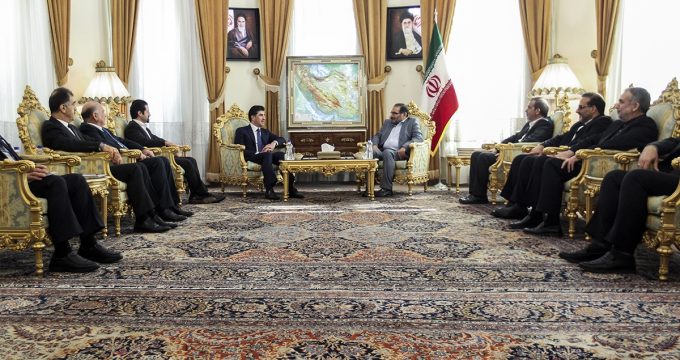 Speaking in a Sunday meeting with Prime Minister of Iraq’s Kurdistan region Nechirvan Barzani in Tehran, the top Iranian official stressed that security is the Islamic Republic’s red line.

“It would be totally intolerable [to see] that some anti-revolutionary groups use Kurdish territories to kill our soldiers and citizens and then return to the areas controlled by the [Kurdistan] region to brazenly claim responsibility for those actions in interviews with official Kurdish media,” Shamkhani warned.

“Some believed that the security of Kurdish people was separate from that of other Iraqi citizens, and that it would be possible to manage terrorism and the threat posed by ISIS through negotiations and interaction,” Shamkhani said.

He said some regional and trans-regional countries seek to undermine Iraq and major countries in West Asia, adding regional countries should remain vigilant and take into account their national interests as well as the interests of the Muslim world to thwart colonialist schemes such as the so-called Greater Middle East Plan.

Shamkhani further noted that the victory over the ISIS terrorist group, the full liberation of Iraq and ridding Iraqi people of the biggest regional terror threat are a harbinger of a better future for an integrated Iraq and show foreign conspiracies to sow discord in the country have been foiled.

He touched upon both nations’ interest to have closer bonds and referred to the historical exchanges between Iranian and Iraqi people, especially in Kurdish-majority areas.

“Despite plots hatched by the enemies of both nations, grounds for all-out cooperation and strategic relations between Iran and Iraq are growing,” said Shamkhani.

“The Islamic Republic of Iran’s close cooperation with the Iraqi government and sustaining considerable material and human costs in order to establish stability, security and progress in the country (Iraq) was a historical and unforgettable test to prove [Iran’s] honesty, brotherhood and belief in good neighbourliness with Iraq,” the top Iranian official underlined.

He said as Erbil’s new policies focus on talks and cooperation with Baghdad, Iran, for its part, will tap into all of its potential to contribute to the settlement of existing problems and help push this trend forward.

For his part, Barzani, who is in Tehran at the head of a high-ranking delegation, briefed Shamkhani on the latest developments in Iraq’s Kurdistan and in the Middle East region.

He said Iran has always stood by the Iraqi Kurdish people, adding, “Iran and Iraq’s Kurdistan have civilizational and historical ties, and the Kurdistan region takes pride in its friendship with the Islamic Republic of Iran.”

He also touched upon Iran’s good support for the security of the Iraqi Kurdistan region and its people at a time when ISIS terrorists attacked the area.

“The enhancement of relations and cooperation between Iran and the Kurdistan region will not be affected by ill-wishers, and we will use all our power to stop security threats against Iran,” Barzani highlighted.