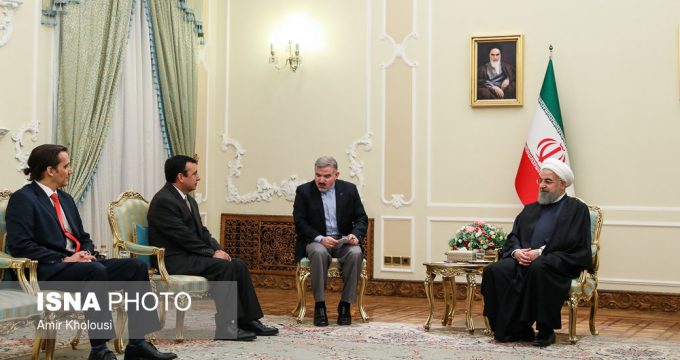 president.ir- President Hassan Rouhani met with the new Ambassador of Chile to Tehran, Ignacio Lianos, on Saturday to receive his letter of credence and said: “Developing relations and cooperation with Latin American countries, including Chile is very important for Iran”.

“Tehran and Santiago have very good potentials and capabilities in various fields, which must be taken the best advantage of to deepen business and economic relations and cooperation,” Dr Rouhani added.

He also described promoting ties between private sectors and banking relations essential, adding: “Today, because of the Joint Comprehensive Plan of Action (JCPOA) and lift of sanctions, there are good opportunities for further development of ties between Tehran and Santiago, and I hope that we witness better relations between the two countries”.

“We call for sustainable peace and stability and fighting against terrorism and violence in the world and believe that all countries must work together in this regard,” continued the President.

Dr Rouhani stressed non-proliferation of weapons of mass destruction in the world as very important and said: “Today, arms race in the world and threats against countries around the world have caused concerns for all countries and peoples worldwide”.

“Iran and Chile can have good, positive cooperation and negotiations in the field of peace and security in the world,” added Rouhani.

The new Ambassador of Chile to Tehran, Ignacio Lianos, presented his letter of credence to President Rouhani and underscored the good relations between Iran and Chile and ample potentials for cementing reltions.

He said: “Strengthening global peace and security and promoting international cooperation with the Islamic Republic of Iran, as an important, effective country, is very important for Chile”.